Be prepared for cost overruns, finger-pointing, and bad publicity

Money, money, money! Of course, money is a subject that occupies many of a librarian’s waking thoughts and occasional nightmares. However, money issues on a construction project can become so numerous and so stress-producing that you may feel tempted to sign up for the Foreign Legion or flee to Timbuktu.

If you’re embarking on your first library construction project, you’re likely a neophyte when it comes to reading blueprints. No matter how diligently you study the plans, you will almost inevitably fail to recognize problems that your contractor will insist are clearly indicated. There are also a number of vital necessities that the architects solemnly promised to include but somehow forgot. This means that as construction on the new library progresses, change orders will become the scourge of your existence. You will discover that assumptions any 10-year-old could be expected to take for granted have eluded your building professionals. To be honest, it is sometimes your own fault for having failed to ask enough questions or spend sufficient time digesting the information you’ve been given. Change orders almost always cost money unless you can clearly establish that you made your needs known in advance (usually in writing) and your request was ignored.

There is probably no way of avoiding change orders altogether, but they can usually be minimized. In addition, better-written documentation of your requirements may mean that the library need not pay for all change orders. Don’t trust yourself to catch every problem: Ask the library staff to review floor plans and imagine themselves performing their usual tasks in the new spaces. Request extra copies of the blueprints, but be prepared to pay for them. The relatively minor cost of extra sets of plans will be more than repaid by savings on change orders later. Ask staff to think about the locations of closets, positioning of light switches, and placement of doors. Each person could be made responsible for identifying potential problems in his or her assigned area.

Getting the numbers right

Libraries rarely cost precisely what we expect. Since there are thousands of variables (e.g., the price of steel, the condition of the soil, labor disputes), numbers will keep changing throughout the life of the project. The problem is that library boards, government agencies, and the news media, as well as taxpayers, have all been told that the library will cost a given sum. Sometimes that number is specified in a sales-tax resolution or bond election. The city council or the county commission have been assured that this amount will be needed and no more.

Politicians get elected by promising to control costs and save taxpayers’ money. If they have not been prepared for cost increases or have not approved any additional funds in advance, there’s a good chance that the library may be blamed for fiscal irresponsibility—for “library,” read “library director.” Of course, the library board has the final word in monetary decisions, but it is often assumed that the director is the one responsible. Newspapers may be willing to run upbeat articles extolling the wonderful new library on page 10, but you can bet that the story accusing library officials of fiscal mismanagement will be right there on the front page.

Many librarians have discovered that no one on the project is really keeping track of each and every unanticipated cost. Even a project watchdog or manager hired by the library may be unclear about who’s paying for a change order. The contract itself may not clearly spell out which costs are fixed and which can be adjusted by the contractor; for example, a limited selection of wall treatments or flooring materials might be included in the contract, but so-called premium selections cost extra.

Because library directors’ reputations can be irreparably damaged by such misunderstandings, it’s in their interest to become the best source of accurate information. Unfortunately, this means becoming something of a broken record, asking again and again “Will this cost extra?” and “Will this increase the cost to the library?” Each time it becomes clear that something must be done differently or that more materials or labor will be needed, you will need to find out who’s paying for it. It’s best to expect that contractors will interpret contractual clauses in the way that’s most advantageous to themselves. That means you will need to practically commit to memory the relevant sections. Fuzzy phrases should be discussed and clarified in written communication.

Library construction projects need to start out with an understanding between library participants and local government officials. Among the most contentious subjects is the authority to make financial commitments. Again and again, it will be learned that something will cost more than anticipated. Must the increase be officially approved? Can it be authorized by the library director without board input? Can it be authorized by the library board without city or county input? Is the library director authorized to make monetary commitments up to but not exceeding a given amount? For smaller cost increases, it is usually possible to spend a little more on one thing and cut back on another; eventually, however, such changes will put a project over budget. Neither local government agencies nor taxpayers react well to unexpected cost overruns, so it is essential that a plan be in place to sound early warning bells.

When you were a child, you probably played the game “musical chairs.” Each time the music stopped everyone rushed to take a seat, but one person was left standing without a chair. When building projects go over budget, everyone rushes to escape blame. While the library board and government agencies maneuver to protect themselves, the one person left standing is often the library director; no one is so intimately involved in the project or so publicly visible.

Occasionally, even with the most efficient project management, there is simply no way to complete a library building under budget. If the worst happens, library directors should realize that they could be left holding the bag. To protect themselves, they should be able to produce written documents, including correspondence with local officials, minutes of library board and city council meetings, and other evidence that procedures were followed, officials kept informed, and expenditures authorized by the appropriate persons. I emphasize the word written here because casual conversations provide little support. When bureaucrats’ jobs are at stake, they may conveniently forget that they were made aware of problems or unofficially agreed to changes.

Since contractors are probably keeping track of additional charges on spreadsheets, it’s a good idea for library directors to maintain project spreadsheets of their own that include as much description as needed to clarify each and every unexpected expenditure. At frequent intervals, compare your figures with your contractor’s and reconcile any differences. Ask your project manager for input, and you may even want to be sure that other building professionals agree with your understanding. Once you’re sure that your figures are correct, share them with your board and other oversight groups when it’s appropriate to do so. In my experience, building professionals tend to overlook a variety of costs when the money will not be going directly to their firm. This occurs less frequently with the design-build delivery system where architects, engineers, and contractors all work under the umbrella of the same business entity. However, the problem is never completely absent.

If it looks as if the project will go over budget, begin taking action immediately. Find out what your options are. What chance is there that additional funding will be approved? How might the project be pared down without doing major damage to the future library program? Then decide how best to present this information to those who must make the final decision. Since you knew from the start that your building might cost more than expected, you should have a plan in the back of your head to deal with this eventuality. Of course, you want to believe that every inch of space is vital and must not be sacrificed. However, to survive the ordeal with a minimum of conflict and with your reputation intact, concessions need to be made. You will need to see the project as the public might. What will really matter to them?

Remember that building projects cause tempers to flare and nerves to fray. It is not even unusual for heads to roll in such a highly charged environment, and you certainly do not want to place your own head in danger. You will have to balance your determination to build the perfect library with your instincts for self-preservation. When the last carpenter has taken his lunchbox and departed, you can also bid adieu to the architect and contractor. If your superior diplomatic skills failed you and you nearly came to blows, you need never speak to them again. Your job, however, should be just as secure as the day you took on the project. In fact, you should have established such a good working relationship with your superiors that they now understand far more about the library and its needs. 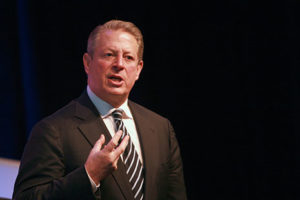 Global warming threatens the entire planet, says the author of Our Choice, in an exclusive interview with American Libraries.

Grow Your Own Librarian