[For UPDATE, scroll down to end.] The People’s Library at Occupy Wall Street was destroyed in the early morning hours of November 15. Without warning or provocation hundreds of militarized New York police officers cleared the park starting at 1 a.m. The library was torn down in the dark of night and its books, laptops, archives, and support materials were thrown into dumpsters by armed police and city sanitation workers. Numerous library staff were arrested, and, in one case, a librarian strapped the notebooks of original poetry from the library’s poetry readings to her body before lending aid to comrades who had been pepper-sprayed.

Prior to its destruction, the library had reached new levels of growth with laptops, a Wi-Fi hub, and a tent donated by author and rock legend Patti Smith and dubbed “Fort Patti.” The library also had thousands of circulating volumes. Library staff rightfully prided themselves on their collection, the entirety of which was donated by private citizens and corporations for the general public good. The collection included the holy books of every faith, books reflecting the entire political spectrum, and works for all ages on a huge range of topics. These were thrown into dumpsters amidst tents, tables, blankets, and anything else on the Zuccotti Park site.

Library staff were assured that they would be able to recover their materials from a city sanitation depot. Indeed, the firestorm of public hue and cry that followed the clearing of the park, the destruction of the library was the only aspect of the action to which the city directly responded. However, when library staff attempted to collect the library’s property on the morning of November 16, they found the laptops smashed, much of the collection missing, and many of the books that were recovered damaged beyond recovery. The damage to the library’s archives of zines, writings, art, and original works is devastating and irreparable.

Protesters were allowed back into Zuccotti Park less than 24 hours after they were cleared out, following a variety of legal decisions. The library was immediately restarted with a half a dozen paperbacks. Within two hours the collection was up to over 100 volumes and the library was fully functioning—cataloging, lending, and providing reference services. “The library is still open” was repeated like a mantra. “This is why I became a librarian, this is why I went to library school,” Library Working Group member Zachary Loeb said of the rebuilding. He was also quick to point out that, while he had helped to build and maintain the collection knowing full well that the park would probably be cleared eventually, the manner in which it was done hit him hard.

Tents and tarps are strictly forbidden in Zuccotti Park now. During the reoccupation on the evening of November 15, it started to rain so library staff put a clear plastic trash bag over the collection. Within minutes a detail of about 10 police descended and demanded that the covering be removed because they deemed the garbage bag to be a tarp. There were a few tense minutes as staff tried to convince them otherwise, but ultimately it was removed—leaving the collection open to the elements. As the police withdrew, scores of people chanted “BOOKS . . . BOOKS . . . BOOKS . . . BOOKS.” There was still concern that the park might be cleared again that night, and one officer made it clear that “unclaimed property will be removed and disposed of” in reference to the collection. Library staff quickly set up umbrellas over the bulk of the books and began sending librarians home with bags of books to keep the collection safe in remote locations.

Zuccotti Park looks very different now. The various stations for food, information, comfort, first aid, and the like had created a village atmosphere. Now all of that has been cleared away, the park is practically just another sterile stretch of stone in the city. “You can clear the tents but you cannot clear the people” has become a new OWS slogan. Within hours of the park reopening, and despite strict access and security protocols, more than 1,000 people were there for the first General Assembly and their claps and shouts echoed off the skyscrapers around the site.

Amidst it all, there was also a functioning library, a small one under fire, but a library just the same. While the future of the Wall Street occupation is unclear, these protesters still believe in what libraries offer everyone. For these activists “The library is open” has become a battle cry.

CHRISTIAN ZABRISKIE is the founder of Urban Librarians Unite and coauthor of Grassroots Library Advocacy: A Special Report (ALA Editions, 2012).

Ed. note: Late Wednesday morning, the Occupy movement launched Occupy Educated, explaining the action as “an emergency response to the destruction of the library at Occupy Wall Street, a clear attempt to destroy the education of passionate people who are tired of living in a deeply flawed system. Razing libraries and burning books has historically failed every time; this will be the most colossal failure to repress education in history, because the education will not be centralized.”

UPDATE, Nov. 17: According to the People’s Library blog, last night New York sanitation workers confiscated the approximately 100 books that comprised the newly started library collection after police cordoned off the space in which the books were being made available. Numerous media have filed reports, with some links are available here. #owslibrary

Additionally, the American Library Association has issued a statement about the books’ disposal. 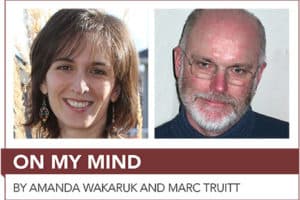 Would your patrons value a gadget-free quiet zone in your library?

Reach Out through Outreach

A library community is wherever the patrons are