Anchorage partners with the walking dead to teach disaster preparedness

Imagine the library from hell: stacks filled with unseen dangers; furniture that’s been overturned and tossed into makeshift barriers; groans, shrieks, and manic laughter as frantic patrons struggle in dim, emergency lighting to find safety from monsters lying in wait to terrify, give chase, and contaminate them with a single touch.

This was the scene inside Alaska’s largest public library on October 20, when two floors of the Z. J. Loussac Library in Anchorage were transformed into zombie central for an emergency preparedness program. The goal was to teach local residents how to prepare for natural disasters and pandemics.

Preparedness is a serious concern in Alaska, where the list of potential life-threatening situations is long: earthquakes, tsunamis, avalanches, volcanoes, dangerous wildlife, and blizzards. Because the state is geographically isolated from what Alaskans like to call the Lower 48, local grocery-store shelves would empty quickly if a natural disaster were to cause the Anchorage seaport and airport to shut down. Nevertheless, it is an ongoing, uphill battle to make residents realize the importance of being able to shelter in place (in their homes or wherever else) for up to two weeks is an ongoing, uphill battle.

The federal government has been urging preparedness lessons ever since Hurricane Katrina. But what sparked the public’s imagination was the Center for Disease Control’s tongue-in-cheek declaration last year that this October would be Zombie Apocalypse Month. (A tag line tweeted by the CDC in May 2011, “If you’re prepared for zombies, you’re prepared for anything,” received more than 30,000 hits within a few moments, crashing the center’s Preparedness 101: Zombie Apocalypse page.)

“Using library space as a zombie maze may seem a bit unorthodox, but it is right in line with the library’s expanding role as a center of this community,” said Mary Jo Torgeson, director of Anchorage Public Library. “For the past five years, Loussac has hosted the free, local Safe and Sound Emergency Preparedness Fair on its grounds. Dozens of companies and agencies set up hands-on booths teaching a variety of emergency and preparedness skills. We have a long history collaborating with the organizations involved with the Zombie Apocalypse.”

Dawn Brantley, emergency programs manager of the Anchorage Office of Emergency Management, spearheaded the organizing committee. Other members included Jennifer Ruggles and Ken Takakuwa of the city’s Department of Health and Human Services and myself, representing the library. Additionally, volunteers Jennifer Midthun and Amber Brown of Bezek Durst Seiser Architects designed the maze used inside the library.

“The Zombie Haunted Scavenger Hunt never would have happened if the library hadn’t opened its doors to us,” Brantley said. “This whole event was done on a shoestring budget and any other building that was large enough would have cost thousands to rent.”

The committee decided to use levels one and three of Loussac’s four-story space for the scavenger hunt, which was divided into a less scary, shortened version for ages 12 and under (accompanied by parents) and a longer, scarier version for teens and adults. There were activities for younger players on level one from 3 to 5 p.m., when the library closed. Within an hour, level three was transformed into a continuation of the zombie-infested maze for the teen/adult game, which took place from 6 to 9 p.m.

“It was very challenging to create a design on level three that would protect the computers and keep players from touching, damaging, or taking items along the maze,” said architect Jennifer Midthun. “On the other hand, being able to incorporate the stacks in the maze made it very interesting and much more complex than the first-level part of the game.”

To play, survivors picked up information cards at stations throughout the maze. Each card described an item needed for sheltering in place. (For example, the “water” card explained how much water was needed per person per day, along with storage suggestions.) Zombies stationed along the maze had glow gel on their hands that was invisible except under black light. Survivors emerging into the “safe human zone” on level three were scanned to show their level of exposure to zombie brain-eating fever and then “decontaminated” by Anchorage firefighters.

Despite the inevitable snafus, the Zombie Haunted Scavenger Hunt was a huge success. More than 100 volunteers of all ages helped stage the event, 55 of whom also wore startling and wonderfully horrible costumes and makeup to portray zombies. Nearly 800 people went through the mazes during the two games, and 90% said they would participate again—many indicating an interest in volunteering next time.

As for the library, staging the games is already paying off. People left the event raving about the library. Many responded in an after-event online survey that they now see the library in a whole new way. Dozens of teenagers, both players and zombies, are checking out other services available in this building they’ve made their own. Event photos and videos posted online continue to heighten excitement about the hunt and the library. Metamorphosing into zombie central for a day has put a whole new face on what the local library is—and can be.

Reports still coming in on library flooding from Hurricane Sandy 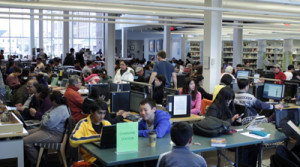 Many served as lifelines to residents without power