Seven years ago, then–ALA President Leslie Burger helped launch the Emerging Leaders program with 117 participants and 23 projects. This year’s class of 55 Emerging Leaders met at Midwinter in Seattle, and will present their projects at the ALA Annual Conference in Chicago. Open to librarians and support staff who are new to the profession, the 2013 class of Emerging Leaders gathered to network and begin assigned group projects while learning more about ALA.  A selection committee considers geography, gender, ethnicity, and type of library in choosing a diverse group.

We thought you might want to know a little more about the talented library workers selected this year, as you probably will be hearing from them in the near future if past classes are any indication. The 2007 class, for example, includes current ALA Executive Board member Alexia Hudson-Ward and American Libraries E-Content blogger Christopher Harris. Luminaries shine in every class.

We’ve created a set of trading cards of the 2013 Emerging Leaders. You can get a real deck of those cards at the Gale Cengage booth at Annual. While there, why not find each Emerging Leader and have them sign your cards? Who knows what they’ll be worth in the future!

This month, the Digital Public Library of America (DPLA) launches, after three years of plans, meetings, and old-fashioned hard work. As our story notes, when DPLA goes live, “it will already contain hundreds of collections from around the country, from daguerreotypes of African slaves to medieval manuscripts, from 19th-century newspapers from small-town Kentucky to newsreel footage from much of the past century.” The DPLA will be a portal to a wealth of collections.

What would you do if your library basement filled with water and soaked books, artwork, or other fragile pieces? You could call the American Institute for Conservation’s Collections Emergency Response Team hotline. With Preservation Week being celebrated April 21–27 this year, we’re sharing a first-hand account of one librarian’s shift on the hotline. It’s a compelling story about the work of preservation librarians and how to be proactive regarding your own collections.

It’s been 10 years since the Supreme Court upheld the Children’s Internet Protection Act. If you’re still a little fuzzy on what you’re obligated to filter, Deborah Caldwell-Stone gives you First Amendment tips. 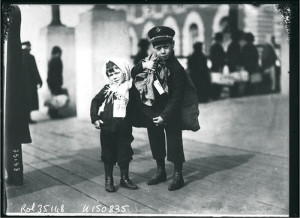 A Digital Library for Everyone