As physical collections shrink in response to the digital revolution, most libraries are looking for ways to keep the turnstile spinning. In central New York near Syracuse, Liverpool Public Library (LPL) found one answer this past spring in the call of the wild, namely, the growing geocaching craze.

Geocaching is a cross between an outdoor hike and a scavenger hunt—except that it is fueled by technology. Participants in this popular pastime look for a hidden treasure, or cache, using global positioning system (GPS) coordinates that are accurate to within 40 feet of the item being sought. At that point searchers rely on clues to guide them the rest of the way. According to Geocaching.com, there are more than 1.98 million active geocaches and more than 5 million geocachers worldwide.

Fortunately for LPL, Onondaga Lake Park is two blocks from the library’s front door. An urban recreation area of almost 3,000 acres, the park has seven miles of trails used by hikers, bikers, and skaters. Boaters enjoy the cool breeze off the park’s namesake lake—perfect for a geocaching adventure.

Of course, with some imagination on the cache creators’ part, urban environments can lend themselves to geocaching just as easily as rural settings. ProgrammingLibrarian.org—the online resource center of ALA’s Public Programs Office—reported in 2010 that Chicago Public Library supplemented its fall 2009 “One Book, One Chicago” selection of Carl Smith’s The Plan of Chicago: Daniel Burnham and the Remaking of the American City with an architectural treasure hunt of geocaches stuffed into plastic test tubes hidden throughout the city. The slips of paper inside contained tidbits about Burnham’s vision for Chicago.

ProgrammingLibrarian.org also described how the University of Notre Dame in Indiana helped first-year students acclimate to the campus library system several years ago through a geocaching activity called “Cache In at the Libraries.” Those who found all the caches entered a drawing for an iPod Shuffle.

Joining in the programming fun this summer, many West Virginia public libraries will host the WV Geocaching Adventure on their grounds in celebration of the state’s sesquicentennial. Players can visit multiple libraries to win a path tag designed by the state’s Department of Education and the Arts.

LPL’s geocaching goal was similar: to engage nature lovers with the library, and vice versa. And it worked. Within minutes of announcing the library’s caches on March 20, 2012, the geocaching bloodhounds were on the scent, and participants were reporting their progress almost immediately. One hundred and forty-four people borrowed “On Safari” Liverpool Library backpack kits in a 10-month period. Twenty backpacks, 10 of which were designed for the library geocaching game, were developed through a $5,000 library grant from the Onondaga Lake Partnership and led participants to five caches hidden in Onondaga Lake Park.

Each backpack contains a paperback copy of The Geocaching Handbook and a quick-start guide produced by the library. The critical piece of equipment in each backpack is a Garmin eTrex 20 handheld GPS device. Ten were purchased with about $1,800 in grant funds. Loaning the GPS device enabled anyone, regardless of disposable income, to enter the game.

LPL housed treasures in purchased cigar-box-sized containers made of semitransparent plastic, and placed about a half-dozen in each of the five cache boxes. The treasures stashed inside consisted of inexpensive items such as key rings, bookmarks, small animal figures, little plastic tops, and used costume jewelry. (Since geocachers operate under a “take something/leave something” code of ethics, LPL has never had to restock boxes.) The library also placed a paper logbook and pencil in each box so players could record their progress or pass along messages to those who followed.

LPL had provided incentives to get players excited: The grand prize was a family cruise, donated by a local boat touring company, on Onondaga Lake. Any individual or team who found all five library caches by a given deadline was automatically entered in the midsummer drawing, and the library knew who qualified because everyone’s progress was tracked at Geocaching.com.

A second incentive was a little piece of metal called a travel bug. To geocachers, it is a real treasure. Similar to a military dog tag, a travel bug has a serial number. All five library caches initially contained one. The game creator posts a mission for each bug online, such as “Visit every state park in New York.” Geocachers carry out the bug’s mission one step at a time and, as it turns out, love being put to work.

A geocacher removes the travel bug from a cache, places it in another cache in accordance with its mission, and then reports the move to the website along with the new GPS coordinates. For this reason, travel bugs and similar items are called “trackables” and they add significantly to the fun. Trackables are not expensive but do need to be included in any geocaching budget. LPL bought its travel bugs from Groundspeak, the company that created Geocaching.com.

There are ground rules for hiding caches posted on the geocaching website. For example, they cannot be buried underground and they must be a minimum of 500 feet apart. However, putting a cache under a log or covering it with twigs or leaves is allowed. LPL hid four of the caches in natural nooks and crannies, but one cache was put in a birdhouse built for the activity, with a subcompartment underneath the avian living quarters.

This modern-day treasure hunt is a natural fit for libraries of all types to add to their programming. 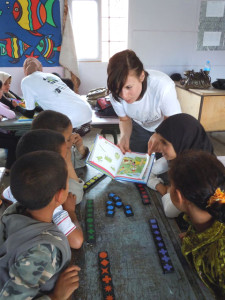 Libraries Without Borders evaluates the role that books, freedom of expression, education, and culture play in humanitarian emergencies 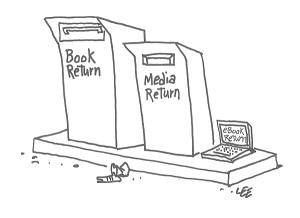