When the stacks disappear

What’s a library without books?

That’s the question a lot of people were asking even before Bexar County, Texas, opened its all-digital library, dubbed BiblioTech, on September 14. The bookless facility serves an unincorporated area outside of San Antonio, offering more than 10,000 titles available for digital download and 100 e-readers on loan, as well as computer stations, digital literacy classes, and a coffee shop.

BiblioTech will allow the county to open a library in an area that previously had none, for less money and in less space than it would cost to open a facility with physical materials.

BiblioTech’s head librarian, Ashley Eklof, says the facility will allow her to focus more on helping patrons connect with information and less on circulating physical books.

“My primary purpose as a librarian is to provide information access,” said Eklof. “Of course, there is a technological focus when working at an all-digital library, but I feel that it is necessary for libraries and librarians in general to be tech-savvy in order to meet the changing needs of the patrons.”

Because the library doesn’t have to build or maintain a large facility or a physical collection of books, budgeting for e-content is easier than for most public libraries. BiblioTech will license its content through 3M Cloud Library, an ebook lending service for public libraries. 3M’s system includes touch-screen “discovery stations,” kiosks where users can browse ebooks on a large screen and then download them directly to the library’s e-readers, or read them through an app on their own device.

In addition, the digital format allows Eklof to tailor the library’s collection to the interests of her patrons.

“One perk of having our content in an electronic format is that if a patron asks for a book that we don’t have in the collection, I have the ability to add it for them instantly,” said Eklof.

Another goal of BiblioTech: narrowing the digital divide. The library will serve Bexar County’s low-income residents who may not have home internet access or other technology tools.

The University of Texas at San Antonio (UTSA) decided to open its all-digital Applied Engineering and Technology Library for much the same reason—to serve a population that includes many low-income Hispanic students, many of whom are first-generation college students. Grads told administration that what they needed was a space to ask questions and get help with their homework. But the college was short on space. They had to fight to get just two labs in the new engineering building on campus.

“In such a small space, we decided that the least important thing there was the physical books,” said Krisellen Maloney, dean of libraries at UTSA. 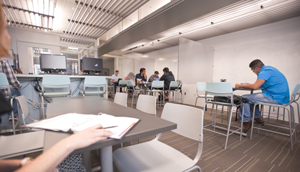 The Applied Engineering and Technology Library has computer stations and modular furniture that can be moved around to accommodate groups of students, as well as a staff that can answer questions and offer tutoring. Students can access the more than 50,000 e-journals and 470 databases the library subscribes to both in-house and at home on their computers or mobile devices. Maloney says the two small rooms are always full and are used by 1,900 students every week.

But Maloney also acknowledges that being solely digital wouldn’t work for libraries housing other kinds of subject matter, such as the humanities.

“A lot of what the engineers use is already online. For that particular population, having a digital library is exactly what they need,” said Maloney.

She added that she doesn’t think the all-digital movement is a threat to traditional libraries. Instead, it showcases the real services libraries have always provided.

“What I’m seeing is this movement acknowledging that these services libraries provide are as important as the books,” said Maloney. “Libraries are being acknowledged as to how central they are to communities.”

In fact, when news stories first appeared about the UTSA’s “bookless” library, touting the extensive services they offered, Maloney’s staff didn’t understand what all of the fuss was about. “They told me, ‘This is just a lot of hype. This is just what we do.’”

MEGAN COTTRELL is a Chicago journalist who won the 2013 Studs Terkel award for writers who excel at telling stories of everyday people.

Our push to change the publishing landscape