On a clear autumn day, I sit on my balcony reading a book when I hear a muffled cheer and see fireworks erupt. Moments later, a slightly delayed TV signal repeats the same sounds from the Chicago Bears game at nearby Soldier Field. All day, people in orange and blue shirts parade down the streets, heading for the stadium or just to grab lunch and watch the game on TV. Switch out the jerseys and it’s a ritual repeated all across the US. For those of us who left our team-cheering days behind at college, this is quite eyeopening. I’m lost after singing the first line of the Bears fight song and certainly know nothing of building my own fantasy football team. But I’m in the minority. This is a great way to get—let’s face it—a primarily adult male audience into the library. In this issue, Adam Doster tells us how to tap into this avid fan base to research, read, and slot their fantasy sports teams at your library. Check out all his suggestions.

Each November 22 we recall with sadness the day when President John F. Kennedy was shot. Whether you are researching his final White House days, or want to help students learn more about his stand on civil rights and the space race, the John F. Kennedy Presidential Library and Museum is working to get that information digitized, just in time for the 50th anniversary of his assassination. With documents, films, audio recordings, and photos, the library already provides 150 terabytes of information on its website. Our story, by Timothy Inklebarger, gives you the library’s and librarian’s view of this massive project.

MLIS students around the country headed back to class this fall. Some went straight to their university library to work, as interns. Not only are the students building their résumés and earning a little cash, they’re gaining practical skills that will give them an edge to a potential employer. ALA has a history of hiring interns, and several are here again this year. Abigail Wise tells the story about how library schools are readying students for the workforce.

On October 1, the Affordable Care Act rolled out across the nation. Libraries geared up to learn the resources and guide staff. The primary question to answer is: What can your institution do best, given staff availability and patron needs? For a quick primer on where to find information, as well as hear what other libraries are already doing, see AL’s story.

Finally, in between your football revelry, insurance sign-ups, and holiday planning, be sure to check into all that’s in the works for the ALA Midwinter Meeting and Exhibits in Philadelphia. We offer a glimpse into programs for the meeting, as well as sightseeing side trips (see the original Ulysses manuscripts or Maurice Sendak illustrations at the Rosenbach Museum and Library, for example). 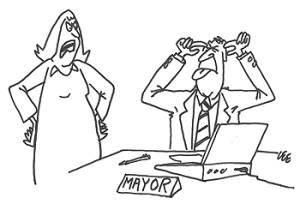 What About the Children?

And the kids shall lead them—to the library 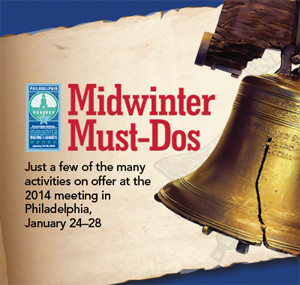 Just a few of the many activities on offer at the 2014 meeting in Philadelphia, January 24–28