Opportunities abound for libraries to connect with communities

For ebooks, it seems, if all is not well, then it is better than it might have been. For the past few years, ebooks have taken an increasingly larger share of the book market in the United States. The rate of growth has recently slowed, but the overall proportion of digital sales continues to rise. Libraries have fairly effectively, though not without a struggle, preserved their lending rights for ebooks through persistence, public relations, and hard negotiating.

I think all is not as well as it might seem, and there are new opportunities and choices ahead. We are on the cusp of witnessing the full impact of the internet on the book business, and it will sweep away much of what we understand today about publishing.

The pull of tides

The internet compels two countervailing trends. The most obvious in recent years has been a tremendous centralization of consumer traffic into platforms that seek to monopolize as much user activity as possible. Apple—with iTunes, iOS, and its App Store—wants your experience of online media and social sharing to be wholly theirs. Google—through Android, the Play store, and myriad web and mobile social tools—similarly wants to have control over your online personae. Amazon, while not as ubiquitous in traditional productivity tools, is interested in being your online store of choice for a vast array of goods and services.

For a publisher of books, music, or video, selling through anyone but these major actors is merely snacking at the dinner table. The large internet platforms promise discoverability, integration of experience, and the tantalizing hope of a digital archive service for the content we purchase or license. Although it is certainly possible to buy an ebook from a niche vendor or directly from a publisher, integrating it into a library or reading application is not for the fainthearted; it remains a task for the passionate or the technically savvy.

We are beginning to see ebook subscription models arise, such as Oyster and Scribd. However, these are emerging in the presence of strong, established ebook platforms, and I would not expect them to succeed beyond narrow niches; the pull toward general media platforms, for most users, is likely to be irresistible. The economics of creating book subscription models that encompass general trade, education, professional, and affinity markets like romance or science fiction is difficult; these are well-differentiated audiences. It is no wonder that the most successful subscription services, such as Safari Books Online for technical books, have catered to small and very dedicated communities.

There’s one other ramification resulting from this trend toward media consolidation, and it is both less obvious and more insidious. As consumers, we have become increasingly attracted to purchasing goods online. It’s simple to do. Prices are usually below those in local markets; shopping time for middle-class consumers is squeezed in the vice of a difficult job market; shipping is fast and getting faster; and platforms like Amazon’s have introduced a range of “Look inside” features to reduce the disadvantage of not being able to handle a product before its purchase.

There are losers in this transition, and bookstores are among them. The loss of the Borders bookstores in 2011 after a prolonged bankruptcy had an effect on publishers far greater than having to mark down the loss of unsold inventory. Consumers buy things they see, particularly if they encounter them repeatedly. Publishers and authors lost thousands of “impressions”—the visual impact of a reader seeing a book—across hundreds of stores, day in and day out. As readers turn toward Amazon to buy books, and as the ebook share of the market grows, the harder it will be for Barnes & Noble to keep its own chain of stores alive. Should that chain fall, in two years or five, something beyond another markdown of inventory is likely to happen.

Impressions matter to publishers. If, today, publishers are able to produce 800 bestsellers every year, then in an absence of big retail bookstore chains, they are only going to be able to generate enough attention for 200 titles to break through. (These numbers are for illustration only.) In a vast and crowded online marketplace, readers will not see the same number of book impressions as they do today. Regardless of the literary merit of those big titles, losing a significant portion of them will have a devastating effect on publishers’ bottom lines. More consolidation will ensue, people will lose their jobs, and general trade publishing will look very different than it does now.

As libraries struggle to arrange attractive licensing deals for ebooks, consider the ramifications of a marketplace that has consolidated from Big Five publishers to only a Big Two-and-a-Half. Because that’s likely to happen. Think about it the next time you buy a book on Amazon.

The rise of the masses

But there’s another trend wrought by the internet, and in many ways it is potentially democratizing. Whether that is a chimerical offering depends in part on the choices we make as readers, and whether libraries can pivot to assume a new role as publishing transforms itself. This trend is not about publishers, and it is not really about books: It’s about authors and writing.

The big thing that happens with the internet is that, over time, the tools that enable us to communicate with one another become simpler. In the beginnings of the web, being able to craft HTML for a website was a highly technical skill. The rise of blogs enabled almost anyone to write through online platforms like LiveJournal, WordPress, and Blogger. Although the modal form for these platforms was the short essay, they were the harbinger of a vast explosion of alternative tools for expression that now encompasses Twitter, Medium, Pinterest, Instagram, and YouTube.

At the same time as a burst of new essay- and storywriting platforms is emerging, authors have a vast new range of opportunities for self-publishing fiction, novellas, and novels. Companies like the Canadian-based Wattpad have seen a rapid explosion in submitted stories; 10 million readers come to the mobile-friendly site every month, and more than 500 writers have submitted works that have been read more than 1 million times. This is a community of avid readers, and it is largely invisible to the traditional Big Five publishers; yet this is a community that the internet has made possible.

Alongside these new venues, independent writers are self-publishing digital books and occasionally breaking through in grand style. Hugh Howey serialized an apocalyptic story called “Wool,” and then packaged it as a novel when sales started to take off. He ultimately sold print rights to a traditional publisher, retaining the digital rights, recognizing that he could earn higher royalties and market his own works by exploiting the recognition he had already received. Wool has sold millions of copies, both in digital and print, worldwide.

Fan fiction writers and self-published authors have established their own online communities, such as KBoard’s Writers’ Café, to share tips and successful practices, ask questions, and seek advice. Much of the added value of traditional publishers in the form of editorial assistance, proofreading, marketing, cover design, packaging, and formatting is either being assumed by the author or outsourced to a growing number of independent professionals who are providing services to this sector. Because authors earn more for every book independently sold than they would with a traditional publisher, there’s an incentive to roll the dice and make it on your own. But it’s not just you; there’s a whole community around you to help.

Another interesting outcome for these writers is that, with success, more opportunities open up. Authors who may have published profitable, full-length novels with traditional publishers are finding that they can use the independent ecosystem to publish a novella that wraps up a loose thread from a romance or science-fiction series, explore what happened to an intriguing but otherwise minor character, or revisit an established fantasy world via a short prelude to the events covered in major works.

This is publishing with a small “p.” But there’s a thornbush in the garden, and it remands us to the trend that we started off with: the rise of media platforms. No matter how well-known you might be as an independent writer, you are almost certain to sell your books in places that consumers can find them, readily purchase them, and read them easily. Overwhelmingly, that’s likely to be Amazon’s Kindle Direct Publishing (KDP) program. It’s no accident that KBoard, the host of Writers’ Café, is dedicated to “all things Kindle”—that’s where books are sold, even if the conversations with fans are taking place elsewhere.

The control of the ebook market by major platforms like Amazon, Apple, and Google is a problem if you care about diverse points of access to literature. It’s a problem for libraries because they are not able to license much self-published literature from OverDrive or 3M, which deal primarily with established publishers and take only a subset of titles from most indie ebook distributors (though now all 200,000 Smashwords titles are available through OverDrive). Independent literature is published most often in Amazon’s KDP by thousands of individual authors. Ebook distributors are encountering a numbers problem, even beyond their inability to entice Amazon to willingly give up reader traffic when it can directly handle both selling and lending transactions. Amazon, strictly speaking, does not need publishers; they can publish directly, and in fact, they are. Libraries are not part of that picture today.

But in a new way, I think they can be. We are living in an increasingly flat, global world where access to content is common, and authors want to address the largest possible audience. Working outward from their community, libraries can help connect authors to readers, and assist the publishing process in ways that have not before been widely available. They can start by assembling packages of tools and services for writers, including local editors, proofreaders, and graphic artists, making publishing easier and more straightforward. ALA’s Digital Content and Libraries Working Group has a forthcoming white paper, “Public Libraries as Publishers,” by Kristen Batch, which canvasses these early efforts.

Even more fruitfully, there is a new and exciting opportunity for libraries to create community publishing initiatives, with a small “p,” by building relations with local authors and sponsoring their attempts to reach a wider world. A library on the Mexican border can foster and raise awareness of the vibrant border literature that bridges complex allegiances of ethnicity, class, and gender in a way that no established publisher could. In eastern Oregon, a library can explore themes of the drought-stricken West, generational pressures on ranching and farming, and Native American communities. Any library can hold a “booksprint”—a group collaboration that produces a finished book in three to five days, guided by a facilitator—to generate a publication on a local issue or a local perspective on a global one. As a community agency, the public library is uniquely positioned to inform, connect, and collaborate with other community organizations.

With the emergence of new publishing tools, public libraries are able to be publishers for themselves. In essence, we can build a Maker culture for local publishing. Although it does not attenuate the market power of Amazon, it provides necessary curation and establishes a forum for individuals who would be otherwise challenged to find place and presence. Libraries can serve as a locally branded publishing imprint, establishing credibility and stature for their authors. This does not reshape the commercial publishing world, but it does something more vital: It ensures a voice for the commonweal. By connecting local authors with the world, public libraries unite the world with their communities.

PETER BRANTLEY is director of Scholarly Communication for Hypothes.is.

Who are we, and who are we becoming? 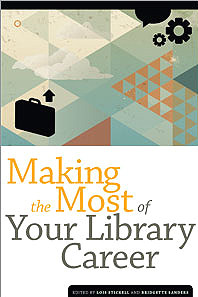 How to Make the Most of Your Library Career