In the middle of the Sierra Nevada Mountains, Vir­ginia Sanchez spends her day establishing order. She sorts through the collection of materials she inherited with her new job—some of which sits in boxes. The work keeps her busy, but she’s eagerly waiting for a call to help off-site with another project. Sanchez says part of her job as librarian of Yosemite National Park includes going on bear team expeditions with the rangers to count cubs and track the population.

It’s not at all what she envisioned herself doing while in library school in Arizona, but she’s thrilled at this new slant on librarianship.

Sanchez is among the growing group of MLIS grads using their degrees as passports to an array of fascinating jobs available outside the tradi­tional library setting. They’re flying to exotic places like Beijing and Australia and presenting at conferences. They’re patenting new software, man­aging popular webzines, and developing curricula in re­sponse to a rapidly morphing profession.

What’s prompting the trend? In part, changes to the job market. The US Bureau of Labor Statistics projects a 7% growth in employment for librarians from 2012 to 2022, slower than the 11% average for occupations across the board. Instead of feeling discouraged, librarians have re­sponded by applying their set of widely transferable skills to alternative careers in publishing, IT, higher education, sales and marketing, finance, insurance, and special collections.

This story will provide tips for job seekers looking beyond the library walls; highlight some of the uncon­ventional career opportunities available to librarians; and offer firsthand advice from the experts—MLIS grads who leveraged their degrees to land rewarding (and sometimes surprising) jobs.

In her book What’s the Alternative? Career Options for Library and Info Pros, Rachel Singer Gordon recommends that librarians begin their career search by identifying the as­pects of the profession that are most important to them. For example, do you thrive on working with the public? Do you love research? Are you com­mitted to intellectual freedom? That process will help job seekers decide which industries as well as specific jobs to target.

“You really have to work backward,” says Abe Crys­tal, cofounder of Ruzuku, a software platform that helps users develop online education. “Decide on a career, then look for the best way to get there.” After finishing his PhD in library and information science at the University of North Carolina at Chapel Hill (UNC), Crystal began work­ing at his alma mater as an adjunct professor. He always enjoyed developing product ideas, so he gradually launched a career as an entrepreneur.

The prospect of being your own boss often attracts people to consulting careers. According to Ulla de Strick­er in her book, Is Consulting for You? A Primer for Informa­tion Professionals, libraries and private corporations will hire MLIS grads for contract work such as product research, collection management, operations assistance, and human resources.

Consulting opportunities for people with library skills will continue to expand, says de Stricker, but librarians need to carefully weigh the benefits and drawbacks of self-employment. The pros? You control which projects you take on, and may even get to spend the day working at home. But not everyone likes that kind of isolation, the irregular work hours, and unpredictable income.

Library school grads looking for more steady nontradi­tional work will find plenty of opportunities with vendors. To see a comprehensive list of companies that provide products and services to libraries, visit the American Libraries Buyers Guide.

“A lot of people wondered how I ended up work­ing at a software vendor,” says Tamir Borensztajn, vice president of discovery strategy at EBSCO. He and his former MLS classmates at Simmons College would get into robust discussions about librarians serving in commercial organizations. But he says software compa­nies are well-recognized as a vital part of the library com­munity. “It’s a partnership that’s very much valued.”

For Hilary Newman, the decision didn’t center on whether to work for a library or a vendor—she just had to decide which vendor. Newman accepted a job at Innovative Interfaces and moved to California right out of library school. She says she loves combining library work with the brisk pace of business.

“I have the coolest job!” she says of her current role as vice president of customer engagement. Newman travels to libraries all over the world—meets with directors, in­vestigates trends and technology needs, and comes up with solutions. Also involved in user group meetings, she recently flew to Australia to give a presentation to more than 60 librarians.

A willingness to relocate (as Newman showed) can dra­matically open up career possibilities for library school grads. Behn Trader earned his MLIS degree online through the University of North Texas while serving as branch manager at Buena Vista (Va.) Public Library. After that, Trader says he stayed flexible and cast a wide net in searching for a job.

Recorded Books, an audiobook publishing com­pany located in Maryland, called for an interview, and Trader was able to parlay his cataloging courses into a full-time job. His main duties now involve working with a programmer to convert metadata into MARC format and create records.

Several sites can help librarians identify nontradi­tional job listings outside their immediate radius. ALA JobLIST offers advanced search criteria that allow job seekers to narrow their search by city and state as well as by keyword and category. David Connolly, classified advertising coordinator, says JobLIST hit a new peak in 2014 with the most number of jobs listed since its launch in 2006.

Another excellent resource is INALJ, which maintains a job database managed by a network of librar­ian volunteers in every state and provides international listings as well. INALJ features a helpful sidebar of key­words for identifying nontraditional jobs that require the library skill set, such as “futurist,” “taxomomist,” and “knowledge architect.”

If you’re not sure what kind of work these jobs entail or whether you’d even like doing them, temp work can offer a low-commitment preview. Kate Kosturski began as tem­porary support staff at JSTOR, a shared digital library that includes more than 2,000 academic journals, and quick­ly leveraged her data skills (coworkers call her the Excel Goddess) to take on more responsibilities. Eventually she worked her way into a full-time position.

Wilson likes that diversity. In one workday, she says she might have a meeting on MARC records and the tools used to provide them; later she’ll discuss ebook acquisi­tions; and then work with a consortium on content. “I appreciate being able to feel connected to all sides of a library,” she says.

SIDEBAR: Read about An Unconventional Librarian

People pursuing new careers are most likely to get job leads from someone they know, says Gordon. “Get to know people in your chosen field, and build a support system of people committed to your success, from family and friends to mentors and ex-coworkers,” she says.

Rachael Altman earned her MLIS from Syracuse (N.Y.) University, then spent a couple years in collec­tion development and reference in libraries at Ala­bama State University in Montgomery and Rockford (Ill.) University. She enjoyed working with students, but her real passion was research. Altman decided to explore corporate career options—possibly in knowledge manage­ment or intelligence.

“To market myself to these corporations, I had to learn the lingo and what they were looking for,” she says. Altman used LinkedIn to reach out to people (mostly strangers) who worked at companies or held positions she found in­teresting, and she met many helpful mentors that way. Offline, she continued to network assiduously at profes­sional organization meetings.

ALA annual conferences serve as fertile networking ground. A session called “Check Out a Librarian” allows attendees to spend a few minutes one-on-one with librar­ians serving in such diverse roles as museum and govern­ment jobs, marketing, and IT, says Beatrice Calvin, program officer in ALA’s Office for Human Resource Development and Recruitment. “It’s like speed dating,” she says.

After five months of interviews and handshakes, Altman landed her current job as a corporate research analyst at Grant Thornton International. “Exciting, exhausting, heartbreaking … but it all worked out!” She likens her work now to solving puzzles—except she’s piecing to­gether corporate family trees. Altman researches their history, organizational structure, where they’re located, and who owns whom.

Naomi House turned networking into a rewarding career of its own. Two weeks into the October 2013 government furlough, she found herself suddenly jobless. She had been working for a contractor as a librarian at the US Census Bureau. On the side, House managed a fledgling discussion list called (ironically) I Need a Library Job.

No longer tethered to her job, House realized she was ready for a career change any­way. She loved the people she worked with, but the commute and certain aspects of her job made her weary. So she threw her energies into her volunteer work: building her website (renamed INALJ) and helping librarians connect with one another and employers.

“To me, ‘library’ isn’t a place; it’s a skill set,” says House, who coordinates more than 180 INALJ volunteers nationwide. That experience has helped her facilitate T160K, a crowdfunding venture focused on raising money for cultural and artistic develop­ment projects in Africa.

Volunteering not only kin­dles new interests, it can give students valuable real-world experience. “Courses are strong on concepts and weaker on practical knowledge,” says Crystal. “You need both.” He recommends library students seek out clients, such as a nonprofit that might need help organizing its internet content, and offer free assistance.

“Our field is changing incredibly rapidly,” says Sandra Hirsh, professor and director of the school of informa­tion at San José (Calif.) State University (SJSU) and chair of the American Libraries Advisory Committee. “While the foundation remains, the shelf life of some of the skills can be short.” It’s essential for job seekers to continue to invest in themselves and stay up to date with emerging technologies, she says.

SJSU and other schools offer opportunities for MLIS grads to learn about changes to the profession and explore new career tracks. Every year, SJSU faculty members perform an audit of job postings on sites such as Monster.com and other databases, Hirsh says, and they use that information to develop new courses geared toward a variety of industries. Examples include cybersecurity, digital copyright, information integrity, open-source software, and crisis informatics.

Many postgraduate classes are available online for low cost or even no cost—and they can help revitalize your skills and your résumé. Here are a few options:

While the courses have changed since Sanchez gradu­ated from library school in 2004, they flow from the same source. MLIS students will continue to learn how to help create and record knowledge. The methods may—as Hirsh says—have a short shelf life, but the essential work of a librarian does not.

“Our field has always prepared people to work in differ­ent environments,” says Hirsh. “We’re the original [source of] user-centered design, and there will always be a demand for people who understand users and technology.” She believes librarians’ opportuni­ties are limited only by their imaginations.

Shortly after she started at Yosemite, Sanchez realized it was her MLIS scholarship that led her there. She attended the University of Arizona as a Knowledge River scholar—a role that centers on preserv­ing our cultural heritage and facilitating conversation among diverse communities. She considers her work at Yosemite, from automating the library to tracking the wildlife, a logical offshoot of that mission.

ELLYN RUHLMANN is a freelance writer based in Grayslake, Illinois. 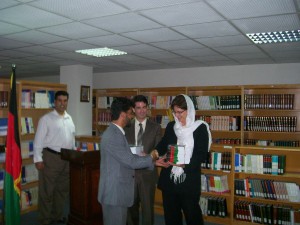 Storytelling for Kids, Teens, and Even Adults

When a picture isn't worth a thousand words