Traditional attitudes toward self-published books are changing. While long decried as the worst-written dregs at the bottom of the publishing barrel, self-publishing has started to attract reputable titles to its ranks thanks to new technologies and business models. These titles, in turn, are attracting audiences, with some self-published books even becoming bona fide smash hits.

“We used to have an event in Glen Ellyn called BookFest involving local merchants and the library,” says Susan DeRonne, adult department director at Glen Ellyn Public Library (GEPL). “[It] had a tent where self-published authors could sell their works, and it became more and more popular in its last years.”

GEPL is one of a growing number of libraries that are acquiring self-published books and making them available to patrons, either in dedicated collections or as part of their regular holdings. These libraries recognize that many self-published works offer unique value and a way to provide service tailored to their community.

“People in Toronto are interested in reading books about Toronto, so we’re interested in buying local books,” says Kathryn McClurg, collections librarian at Toronto Public Library (TPL). McClurg adds that the library has acquired some self-published gems on topics with strong local interest that haven’t been addressed by major publishers. These include a book on Canadian pensions, an important and complex subject, as well as one on growing fruit trees in Toronto, written by a local orchard owner.

Offering an outlet for self-published books created within a community also connects to the mission emerging at many libraries of supporting all phases of the creative process. “We just broke ground on our new makerspace, and we are committed to the idea of partnering with our patrons for creation,” says Kady Ferris, electronic content librarian at Multnomah County (Oreg.) Library (MCL). “We have a big community of writers in Portland who are trying to get their work into our collection, so we wanted to have a formal avenue for them to do that.”

Libraries are taking a variety of approaches to add local self-published books to their collections. One relatively common one is a partnership with an ebook self-publishing platform. That’s the approach MCL took when it launched the Library Writers Project in September, after hearing about a project Seattle Public Library did with the Smashwords platform last fall. Through December 31, MCL will accept submissions from local self-published authors to be considered for inclusion in the library’s collection. Submissions must be ebooks available through Smashwords.

“With print we’d have a lot of issues with staff time and number of copies, but those aren’t considerations in the electronic space,” Ferris says. It also simplifies purchasing: Smashwords has a partnership with OverDrive, the library’s ebook vendor, so the acquisition process is the same as for other ebooks.

For the first year, the Library Writers Project will be focused on adult fiction. “We know that’s the biggest category of circulation for our ebook collection,” Ferris says, although the library considered other genres. Poetry is a possibility for future inclusion, but the library decided that nonfiction would be too difficult to fact-check.

At the end of the submission period, library staff will evaluate the submissions and make selections for the collection. There’s no specific number of books the library plans to acquire. Instead, “we’re looking for books that we can recommend to a patron who is looking for a new read, and start a foundation for a local ebook collection that we can grow,” Ferris says.

The prospect of having their books added to the collection has drawn plenty of interest from local writers. In the first nine days of the submission period, 17 books had been submitted, and many more authors had asked how they could take part. And Ferris is optimistic that the collection can attract an audience. “We have 2,000 people per day visiting our OverDrive site,” she says, “so getting those eyeballs on local writers is a big goal.”

Authors must donate their books to the collection. The staff member responsible for selecting books for a genre or subject area reviews each submission, but DeRonne says that the library will accept most books, as long as they meet the Chicago-area requirements and the books are bound in such a way that they can withstand circulation. However, DeRonne notes that items can rotate out of the collection, either being withdrawn if there is not enough interest or being added to the library’s regular collection if circulation justifies it.

The collection does add some cataloging work because GEPL librarians typically need to perform original cataloging to generate bibliographic records for the self-published works. DeRonne says that the size of the collection has been small enough that cataloging hasn’t been a significant burden.

The library is currently looking at products that will allow it to offer self-published ebooks, and DeRonne says that the library has budgeted to include ebooks in the collection next year. “We expect the collection to continue to grow, particularly when we add the ebook portion, and we’re looking forward to that,” she says.

Because the number of requests has grown so much, the library has formalized its procedures for considering self-published books. “It has really helped,” McClurg says. “Before, many authors thought that they could come in and talk to us for an hour about their books, or that we would buy the book on the spot”—both impractical things for a busy library to do 300 times a year. Since the library started providing information about how the library considers and acquires books, most authors follow the library’s instructions, making the process much more efficient.

Self-published books are subject to the same selection criteria as traditionally published titles. “If the book has been reviewed, that makes a big difference,” McClurg says. Nonfiction books, when the author has strong credentials for the subject, are also good candidates for purchase, as well as books with local interest, such as memoirs or books from particular communities that are valuable for genealogy research.

Actually purchasing the books can sometimes be a challenge. “If the author has made the books available through a wholesaler, it’s the same process as other books,” McClurg says. But many self-published authors handle orders themselves and they don’t necessarily have experience with that side of the business. That can add time and costs for the library if the acquisitions supervisor has to walk the author through the invoicing process.

Still, the benefits justify the costs. “There are good self-published books out there, and that’s why it’s worth our while to make it easier for authors to work with us,” McClurg says.

Connecting to a community

The collections also offer another way for the library to connect to local writers’ communities. DeRonne says that GEPL doesn’t have a dedicated writers’ group, but it does belong to a group of Illinois libraries that sponsors a series of “Inside Writing and Publishing” seminars. “That’s where we got a big chunk of our list of people who might want to submit their books,” she says. The library also hosts programming related to National Novel Writing Month (NaNoWriMo)—the annual event in which participants attempt to draft a novel within the month of November—and it will promote the Emerging Author Collection then as well.

MCL’s collection isn’t directly connected to NaNoWriMo, but the submission period was timed to coincide with the event. The library has established a series of programming related to self-publishing taking place through the end of the year to help local writers finish and publish their books, including a talk by Smashwords CEO Mark Coker.

“We’ve got our Sterling Room for Writers and have done a lot of programs for writers,” Ferris says. “The Library Writers Project seemed like something we could do to shine a spotlight on those local writers.”

Of course, books need to find their readers to achieve their full value, and libraries offering self-published titles are keeping the readers in mind as well as the authors. “I think everyone is looking for their next great read,” Ferris says. “You see the same bestsellers pushed at you all the time, but self-published books let people read local and hopefully get a sense of discovery and delight.” 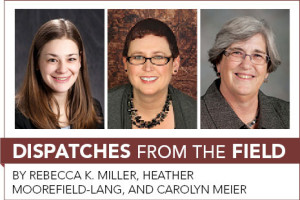 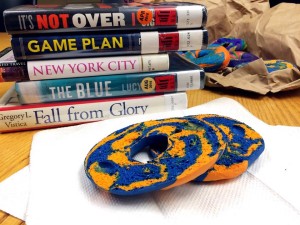