Did you ever get to pull the rod? (If you’re under 40, that probably sounds filthy. Ask somebody older.) I didn’t get to, though I did follow my friend Bryan around as he added cards to the drawers when we were in college together.

Ah, the memories that flooded back when we all heard the recent news that OCLC had printed the last run of catalog cards. If asked, I would’ve confidently assumed that had finished up long ago. An OCLC press release told us that since 1971, the company had produced 1.9 billion cards. My rough calculations give that as about 191 million square feet, which Google tells me amounts to 3,328 football fields’ worth. And don’t forget: LC printed cards for 70 years before OCLC got into the act.

This is a story of transition, in more ways than one. Most obviously, this reflects a longstanding shift in the means by which library materials are organized and searched. The legacy of the card, though, won’t pass away with that last shipment. The nature of cataloging practice and the MARC format structure are still profoundly influenced by the constraints of the roughly 3×5 card, likely derived from playing cards repurposed in revolutionary France.

This is a story of transition, in more ways than one. And the legacy of the catalog card won’t pass away with OCLC’s last shipment.

Hence, we will live, for quite a while longer, with keyword-based systems searching precoordinate subject headings, which work, except when they fail miserably, particularly in increasingly common discovery-based systems that try to find everything everywhere and wind up finding everything everywhere, to great confusion. I admit to my own moment of silence in memory of those early skeuomorphic displays that tried to mimic cards, down to the outline border, call numbers in the corner, and the little green dot at the bottom center for the hole. Sigh.

Buildings have also changed. (Am I the only one who looks in older libraries and notices that the spaces and rooms that once held catalogs are now being used for comfy chairs, computers, or learning commons?)

We are, naturally, a small “c” conservative profession, as we should be. One of our primary responsibilities is to conserve and protect the resources under our care. We are also, often, creatures of habit and routine, overly cautious, doing things “on the off chance” or because “we’ve always done it,” which really means “we were doing it when I got here and nobody told me to stop.” That habit and routine over time can harden into ritual and mindlessness and a tungsten-steel death grip on How It’s Always Been. Often to the exclusion of How It Could Be.

You’ve heard it a hundred times: The best or only way to marshal resources for new initiatives is to give up doing unnecessary or less relevant things. Easier said than done, I know, though in all my travels I’ve heard way fewer people say, “I wish we hadn’t stopped that” than “I wish we could do that.”

We are a profession constantly in transition, and always have been, though it can be easy to forget that in the day to day. What did you do today that you didn’t really, really have to?

We are also in transition in how we are viewed by the people we serve. I think many of the stereotypes and punchlines about libraries are fading, but they don’t die easily. So a story like this is yet another opportunity to engage: “Yes, we honor our history. Weren’t catalog cards something? But now look at all the great new things we’ve developed in data curation.” Or whatever.

The fateful October 1, 2015, press release began thus, emphasis added: “OCLC printed its last library catalog cards today, officially closing the book on what was once a familiar resource….” An intriguing choice of words, demonstrating once again that metaphors are powerful, if tricky, things, and they don’t die easily either … but that’s another story. 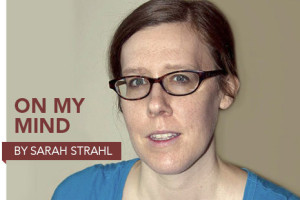 Searching for solutions that serve people