Debra J. Knoll is a former children’s librarian whose research has focused on the development of infants and toddlers and its implications for children’s librarianship. Her recent book, Engaging Babies in the Library: Putting Theory into Practice (ALA Editions, 2016), was excerpted in the June issue of American Libraries. Knoll responded via email to questions about her book and ideas she learned along the way.

What made you want to write this book?

Well, frankly, I didn’t want to write it—I wanted to read it! I wanted to pick up something in writing that I could point to and say, “Yes! Here are some real answers to the daily issues we keep bemoaning, such as how to entice nonusers, how to change our image, how to reach voracious learners, how to enlist the support of administrators, etc. These are things we can do beyond programming, beyond another workshop or task force.” I also wanted to give children’s librarians a solid discussion that validates, elevates, and promotes the deep significance of the everydayness of what they do.

Why would ALA members find it helpful?

By shedding more light on the issues of developing babies and toddlers—along with their entourage of caregiving adults—and by offering suggestions for how to address these issues, the reader will be more aware of and better equipped to improve service to this population. I also hope the book will inspire a deeper respect for babies and toddlers as valuable patrons.

Similarly, readers are encouraged to continue the conversation and are invited to further advocate for all children, for the deep value of the library as an institution, and for children’s librarianship in particular.

What is the most surprising thing you discovered while working on this book?

I discovered that the most commonsense solutions for addressing problems were such “aha” moments. For example, I had a brief discussion with a library director in Kansas who contacted me. When I mentioned that we put an adult computer workstation in the children’s area, she said something like, “Hmm, that’s a really good idea.”

What are you reading right now?

I’m rereading a few great garage sale finds and former bestsellers like Erma Bombeck’s If Life Is a Bowl of Cherries, What Am I Doing in the Pits? and The Sidetracked Home Executives: From Pigpen to Paradise by Pam Young and Peggy Jones. Priceless.

What is your next project?

I’m not really sure. I have been mulling over a few ideas with [ALA Editions] editor Jamie Santoro and colleague Barb Scott, but I haven’t solidified them quite yet. In the meantime, my immediate goal is to make some strawberry jam! 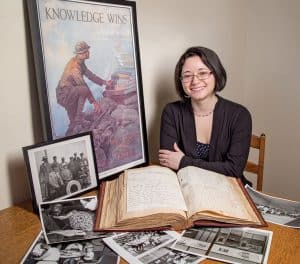 Bookend: ALA through the Ages