Second year of campaign puts the spotlight on librarians

The American Library Association’s (ALA) Libraries Transform campaign is in its second year, and libraries across the country are using its succinct messages, vibrant graphics, and powerful tools to increase public awareness of the value, impact, and services that librarians and library workers provide.

More than 6,900 libraries and library advocates have joined the campaign since it launched in October 2015. From legislative advocacy meetings to social media campaigns, many libraries are using the tools to demonstrate the power of speaking in one distinct, energetic voice for the library profession.

In year two, the campaign continues to focus on libraries turning outward and engaging their communities. But it is also turning inward by emphasizing the “expert in the library,” ALA President Julie B. Todaro’s initiative aimed at getting librarians to shine a light on the transformative work they do daily.

“I want librarians to build on the campaign, highlight the expertise in their library, and think broadly about what makes an expert in the kind of environments that we’re in,” Todaro says.

She says it is important for people to understand that librarians—not just libraries—transform communities. “What is transformative is not only the location or the destination but the person who connects you to resources,” she says.

The librarian: the best search engine

Central to illustrating these messages are “Because” statements—short, clever messages supported by research and best practices about issues related to libraries. The campaign messaging has been updated to reflect the new emphasis on librarian expertise with statements like “Because the expert in the library is you” and “Because the best search engine in the library is the librarian.” The ALA Store has customizable expert badges that allow librarians to showcase their areas of expertise. Librarians at Marshall Public Library (MPL) in Pocatello, Idaho, recently used these badges to identify their expertise in such topics as local hiking and biking trails.

BONUS: Encourage stakeholders to create their own “Because” statements and share them on social media.

“While libraries are a great resource to the community, the library’s greatest resource is its people,” Eric Suess, director of MPL, says. “I wanted to make sure that we could let our patrons and our community know about the significant talents, interests, and abilities that our employees have.”

Because the expert in the library is you

When school librarian Kristina Holzweiss discovered the Libraries Transform i’m an expert in badges, her first thought was, “How can I use these in my school library?” Holzweiss decided to try them out with her student “techspert” team at Bay Shore (N.Y.) Middle School. The techspert students help her in the library with everything from wrangling robots to creating websites and organizing the makerspace.

The badges give the students the opportunity to showcase their expertise in the library to other students as well as to the school’s staff. Since the badges are reusable, they allow students to be an expert in math one day and in Legos the next.

Because fake news can have real-world consequences

Timeliness and flexibility have been strong points for the campaign. When fake news became a hot topic, ALA was ready to promote the skills and expertise of librarians in digital literacy and evaluating the accuracy of information. With “Because fake news can have real-world consequences,” the campaign had one of its most popular social media posts, spotlighting the important work of librarians in information literacy and resources like the CRAAP (currency, relevance, authority, accuracy, purpose) test.

Because your voice is important

Key to the campaign is feedback from its users. Each month, the Libraries Transform newsletter features how libraries are using the campaign. Those success stories are turned into best practices that are incorporated into the campaign toolkit. At a session during the 2017 Midwinter Meeting & Exhibits in Atlanta, one participant suggested customizable table tents that could be used in libraries and distributed to community partners. Shortly after, templates for table tents appeared in the toolkit; they are already being used by libraries.

In early 2017, ALA conducted a survey of Libraries Transform participants, asking them about their satisfaction with the campaign and support materials, how they are using the campaign, and what other materials they would like to see created for it. Of the 165 respondents,

Because support is key to success

Libraries Transform continues to receive wide support from state chapters and associations. The Massachusetts Board of Library Commissioners, Indiana Library Federation, and Ohio Library Council (OLC) are using Libraries Transform in their legislative activities. Organizations like the New Mexico Library Association and West Virginia Library Association have used Libraries Transform as a conference theme or featured presentations on the campaign as part of their activities. The National Network of Libraries of Medicine (NNLM) has sponsored a webinar and is developing aspects of the campaign for its libraries to use.

Lydia N. Collins, consumer health coordinator with NNLM, Middle Atlantic Region, incorporates relevant “Because” statements such as “Because librarians know information is the best medicine for health care questions” in her professional development classes. She says they work well for emphasizing the importance of educating communities on how to evaluate health information.

“What I appreciate most about the campaign is that it contains all of the materials that a library needs to promote the good work that it does,” she says. “Although my focus is generally around health outreach, the campaign works for all types of activities that libraries offer for their broad range of users.”

“Ohio’s public libraries are changing people’s lives—or at the very least, have the resources available to do so,” says Doug Evans, executive director of OLC. “They are an essential part of every community throughout the state. Our advocacy goal is to show legislators how the investment they’ve made in our public libraries has transformed the lives of people in their own communities.”

A key component of OLC’s efforts involved linking “Because” statements with specific examples from Ohio. One statement, “Because more than a quarter of US households don’t have a computer with an internet connection,” was matched with talking points that explained, “The digital divide is real. Twenty-eight percent of Ohio households do not have broadband. Libraries play an essential role in bridging the divide and not just through access. According to Pew Research Center, 63% of newcomers feel they need some assistance in learning how to use the internet.”

OLC will use the Libraries Transform theme for its 2017 advocacy efforts.

“The response from legislators to the message was very positive,” Evans says. “They were eager to incorporate the message into their social media posts, had their pictures taken with our enlarged “Because” statement posters, and proudly wore our custom-made ohio libraries transform lapel pins. It’s a direct, easy-to-understand, and versatile message that works well with our statewide advocacy campaign, and many of our libraries also have adopted the campaign so that legislators see a consistent message back home.” 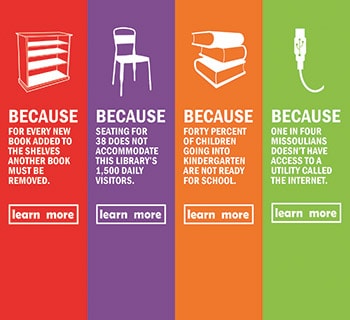 Because you can pass a referendum

“Because” statements played a part in Missoula (Mont.) Public Library’s push for a new building and its successful $30 million referendum. As one “Because” statement informed the public, “Because one in four Missoulians doesn’t have access to a utility called the internet.” During the referendum campaign, the library used the Libraries Transform campaign for educational pieces that appeared on posters, including one pointing out that only 38 people can sit and use resources in the adult section of the library. The new building will triple the library’s capacity for internet connectivity and computer use.

Library Director Honore Bray says the Libraries Transform campaign is a perfect fit for her library—the clean format of the banners and posters “make things very clear and concise” for patrons.

In its second year, the Libraries Transform campaign, under ALA President Julie B. Todaro, is calling attention to the “expert in the library.” One way the initiative plans to highlight experts is by launching Book Club Central, an online platform of the best reading resources. Book Club Central’s purpose is to connect the public with the expertise of librarians through recommendations, book lists, and other content for book clubs and their readers.

Libraries and librarians have always been champions of reading and fostering love of books. Book Club Central expands on what they are already providing library users, whether it’s early literacy programs for children, one-on-one tutoring, or community-wide reading initiatives.

Award-winning television and film actor, producer, designer, library supporter, and avid reader Sarah Jessica Parker is lending her support to Book Club Central by serving as honorary chair (read a Q&A with Parker). Throughout the year, she will provide a selection of her own recommended titles. Parker will be on hand for the official launch of Book Club Central at the ALA Annual Conference and Exhibition in Chicago on June 24, where she will unveil her inaugural pick. 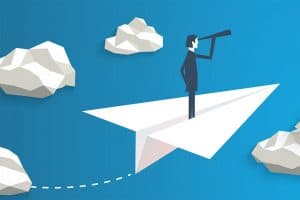 What Do You Want to Do?

Setting goals to renew your career