Getting it right on neutrality and libraries

I’ve always been a wordy sort of person. Yes, that too, but I mean word-y. I was the sort of kid who spent time with a thesaurus and dictionary as well as Tinkertoys and Matchbox cars. I was fascinated by words, their uses, and shades of meaning.

Even my amateur lexicographic interest ill prepared me for a world in which one of the more trenchant voices of political observation belongs to the Merriam-Webster Twitter feed (@MerriamWebster). If you don’t follow it yet, do so immediately, for its largely straightforward Word of the Day feature as well as its often wry and acerbic commentary on trending lookups based on “conversations” of the moment, not to mention words that aren’t really words (“covfefe”).

So the Webster’s dictionary has taken a side, or at least a perspective. Based on what I know of Noah Webster’s own colorful history and antipopulist views, I think he might approve. All of which puts an intriguing gloss on an emerging discussion within our own profession on what some may think a bedrock principle of librarianship: neutrality. This discussion includes my fellow AL columnist Meredith Farkas’s excellent piece on the critical librarianship movement (Jan./Feb., p. 70).

In one important sense, we aren’t neutral and never can be—nor should we be. Naturally, each of us has his or her own biases, prejudices, and preferences; we represent a sample of the breadth of society, so this is inevitable and necessary to avoid homogeneity of thought and action. Together, though, we advocate strongly on matters critical to our success. We fight in public for the rights of our patrons to read and think freely without fear of exposure, surveillance, or censure, as well as for open and equal access to a range of materials. We stand for the principle that government and public information shouldn’t depend on the whims of the moment. We are engaged with, represent, and fight for our communities and strive to improve them through our institutions and our work.

However, delighted as I was at the prospect of hearing Hillary Rodham Clinton speak at this year’s Annual Conference and Exhibition, I hope future American Library Association leadership and conference organizers think seriously about also inviting high-profile people who might hold differing views from some of our organization’s positions on important issues such as net neutrality. If we, of all professions, are unwilling or unable to listen to, respect, and encourage a wide range of viewpoints, even on things we hold dear, then one wonders what in the hell we are doing.

My more serious concern is how our internally focused discussions about neutrality could be perceived. Those who see the opposite of neutrality as “concerned” or “principled” would likely be unperturbed; those who would see it as “partisan” or “biased” could read that as an indication that libraries and librarians have chosen a capital-P Political side, and that’s dangerous territory indeed. As these vital conversations about our roles and stances move forward, I want to be sure that we’re fighting the right fights on the right terms and, yes, using the right words. Note that Merriam-Webster frequently uses the hashtag #WordsMatter.

Might I, then, reach for my well-thumbed Roget’s and offer some ideas for consideration? Perhaps in dialogues about how we can best employ our skills, experience, and resources to advance our communities’ interests and well-being, words such as even-handed, unbiased, and equitable might come in handy when referring to services and collections. I’d also toss in some great old favorites: Just. Independent. Fair. Reassuring people that those words will always describe libraries will be worth the extra time and work required. Especially “in turbulent times like these,” a phrase I have come to loathe … but that’s another story.

JOSEPH JANES is associate professor at the Information School of the University of Washington and author of Documents That Changed the Way We Live (Rowman and Littlefield, May). 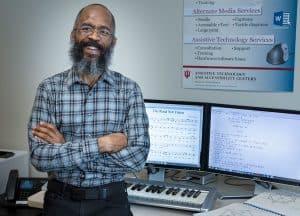 Engaging with the Framework for Information Literacy