Bookend: An Archive of Ice and Fire

In George R. R. Martin’s A Song of Ice and Fire book series and its TV adaptation, Game of Thrones, a massive barrier of ice and rock known as the Wall protects the Seven Kingdoms from threats from the north. “The Wall” at Texas A&M University’s Cushing Memorial Library and Archives isn’t hundreds of feet high like its fictional counterpart, but it is imposing. Nicknamed by library staffers, it’s an area in the library that holds Martin’s personal collection of ephemera spanning his career.

Martin’s relationship with Texas A&M began in the 1970s, when he first visited Aggie­Con, a science fiction and fantasy convention held at the university, says Jeremy Brett (right), curator of the library’s Science Fiction and Fantasy Research Collection. In 1993, Martin began shipping items to the archives, which now include more than 50,000 pieces.

The collection contains replicas of swords used by Game of Thrones characters, which are on permanent display because they are “incredibly popular,” says Brett. The collection also includes short stories, correspondence, personal papers, and items from his time working on the TV adaptation of Beauty and the Beast in the 1980s, but the Game of Thrones items are the most sought after, according to Brett. Patrons can request to view book drafts, shooting scripts, board-game prototypes, and figurines. Lucky patrons may even catch a glimpse of Martin himself.

“He’s been here a couple times,” says Brett, who recounts a gift Martin gave the library during his last visit. “He donated his first edition of The Hobbit. He’s the American Tolkien, so that was very fitting.” 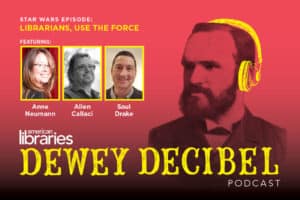 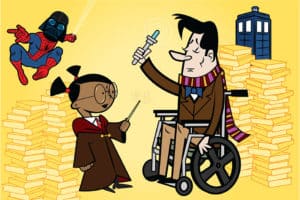 Fellowship of the Fans

Connecting with teens through the magic of fan fiction