These statistics are featured in American Libraries’ “Democracy in Action” special report (Nov./Dec. 2019).

53.9 million
Number of citizens of voting age who reported not voting in the 2016 US presidential election.
Source: US Census Bureau (2018)

15%
Percentage of registered nonvoters who didn’t vote in 2016 because they were not interested or felt that their vote would not make a difference.
Source: US Census Bureau (2018)

64%
Percentage of the voting-eligible population in Minnesota that cast ballots in the 2018 US election—the highest turnout rate of any state.
Source: United States Election Project (2018)

35
Number of states with laws requesting or requiring voters to show some form of identification at the polls.
Source: National Conference of State Legislatures (2019)

11%
Percentage of US citizens of voting age—more than 21 million people—who don’t have a government-issued photo identification.
Source: ACLU (2017)

83¢
Cost to process a paper voter registration form in Maricopa County, Arizona, as compared with the 3¢ it costs the county to process an application received electronically.

390,000
Number of new voters Oregon’s automatic voter registration (AVR) program added in its first 20 months—half of whom were under age 40. Sixteen states and the District of Columbia have approved AVR, with more states expected to follow.
Source: NPR (2019); Brennan Center for Justice (2019)

1 in 3
People living in the US who don’t know the name of their governor.
Source: Johns Hopkins University (2018)

8.6
Average number of visits a US voter makes to public libraries in a year.
Source: From Awareness to Funding, OCLC/ALA (2018)

58%
Percentage of voters who say they would vote favorably for library funding—down 15% from the last decade.
Source: From Awareness to Funding, OCLC/ALA (2018) 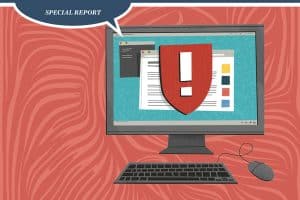