This year, as the census questionnaire moves online for the first time in American history, public libraries across the country are incorporating technology into outreach efforts in innovative ways. Here we look at both urban and rural libraries facing challenges counting certain sectors of the population and the ways they are using tech to capture demographic and economic data.

Baltimore received a $250,000 grant from the state of Maryland to support census outreach efforts, led by the Baltimore Complete Count Committee (BCCC). The committee has worked closely with local libraries to implement a plan for “bringing the census to the people,” says Austin C. Davis, census project manager for the city’s planning department.

In Baltimore, where more than 30% of residents lack reliable (or any) internet access, “we have the unique challenge of ensuring these digital deserts are addressed, and that tech is brought into communities, hopefully permanently,” Davis says. The state grant will help procure technology that can be used to complete the census, including tablets, laptop and desktop computers, and cellphones. The city has also focused on marketing and outreach at local events and meetings, where BCCC members demonstrate how to use the online portal the committee has created to house resources for residents and job seekers.

“To ensure libraries are equipped for the increased demand, we will be placing volunteers in library branches to assist community members in accessing online or over-the-phone census materials,” Davis says. They will have dedicated computers, tablets, and meeting rooms for locals. During the enumeration phase of the census, Baltimore will also rely heavily on the city’s fleet of mobile libraries to provide pop-up census response stations.

City officials in Los Angeles have implemented plans to offer Census Action Kiosks—mobile stations that will provide access to computers and the internet. The kiosks will not be freestanding but will be established in locations with preexisting infrastructure, like libraries.

According to the office of Los Angeles Mayor Eric Garcetti, the city aims to mobilize 197 public facilities to provide census resources to historically undercounted populations. Uniform signage will identify computers citywide that can be used for the census and that will feature a direct, easily accessed link to the online census form.

The Census Goodwill Ambassadors volunteer coalition is working to establish the kiosks and provide residents with information about where to fill out their forms. The majority of the kiosks, the mayor says, will be at public library branches.

“Poor access to technology or a bad internet connection should never be a barrier to participation in this vital exercise in our democracy,” Garcetti said in a December 12 statement. “With our nation’s first-ever digital census around the corner, public libraries will offer reliable and trusted places for Angelenos to get information, fill out their forms, and ensure a full and accurate count in 2020.”

In more rural areas like Cullman County, Alabama, libraries are investing in technology upgrades that will help them reach families in the broad territories they serve. Cullman County Public Library System (CCPLS) this year invested about $32,000 in grant funds, made available through the Library Services and Technology Act, to update 30 public-access computers at libraries throughout the county, which were until 2019 running on the outdated Windows 7 operating system.

“Much of our area suffers from broadband poverty, making our public access computers necessary and in great demand,” says CCPLS Director Sharon Townson.

Broadband poverty in the county, says Townson, means that either folks cannot afford to pay for internet service or that the service is not available in their area. This lack of access poses a distinct hardship for adults seeking employment, children completing homework assignments, and families who may be on the fence about participating in the census.

In 2020, CCPLS branches will house designated computers for completing the census, while a bookmobile will bring Wi-Fi hotspots and laptops to hard-to-reach areas. The bookmobile will travel to community centers, senior centers, industrial parks, schools, sports fields, and churches.

Newburgh, New York, a community on the Hudson River about two hours north of New York City, had a response rate of just 57% in the 2010 census, according to Mary Lou Carolan, assistant director of Newburgh Free Library (NFL). Nearly half of the city lacks internet access at home, she says, but the door-to-door count has its limitations as well—namely, immigrant communities’ misgivings about interacting with the government.

To encourage goodwill between immigrant communities and census workers, the library is partnering with the US Census Bureau to host job fairs encouraging local citizens to apply to work as enumerators. The idea is to recruit “so the faces knocking at the door look like the faces opening the door: neighbors, familiar faces, trusted people,” Carolan says.

NFL is part of a complete count committee that comprises 26 local organizations. “The primary goal of our committee is to be fully representative of our culturally and economically diverse community and sensitive to the needs, fears, and concerns of our large immigrant population in order to get a
complete count,” Carolan says.

The library is one of several designated “communication hubs” established in familiar locations across the city to help residents access and take the census. Each hub will provide laptops and tablets, private spaces to complete the survey, and staffers to help residents navigate the website.

“The library is not only a trusted, welcoming place, but it is also the sole source for internet access for many people in our hard-to-count community,” says Carolan. “Setting up visible, dedicated space to complete the survey is critical to success.” 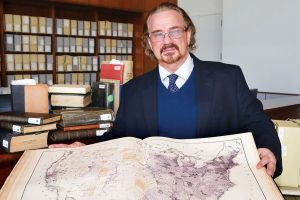 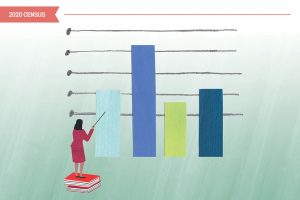