Amid mass protests of police violence against Black people, some libraries are revisiting the ways in which they’ve historically interacted with law enforcement—such as by hosting police-led community programming like Coffee with a Cop, hiring off-duty police as security officers, or calling 911 on disruptive patrons.

For example, Toledo–Lucas County (Ohio) Public Library (TLCPL) has announced that when it reopens after its COVID-19 shutdown, many of the security staff members in its branches will no longer carry arms or wear uniforms. In addition, TLCPL is forming a public safety working group that will “attempt to untangle complex questions about what safety means, who is perceived as a threat, what individual biases we bring to our expectations around public safety, and how we can ensure our public safety practices are advancing positive outcomes for staff, customers, and the community,” reads a June 22 library statement, in part.

“Once we made the announcement, I did get a number of emails from staff—both African American and white—who said, ‘This is something I’ve thought about a lot, and I’m glad we’re taking this step,’” reports TLCPL Director Jason Kucsma.

Positioned as a manifesto of sorts for this movement is a widely read June 9 Medium post by the Library Freedom Project (LFP), which calls for libraries to divest from police.

“There’s no possible way to have intellectual freedom if police are in the building,” says Alison Macrina, who as LFP director oversees the organization’s efforts to educate libraries on privacy and surveillance. “If you are a person who is targeted by police, and you’re in a library when the police come in, you’re going to change your behavior. You’re going to self-censor.”

The Medium post asserts that calling the police to handle patron issues risks incurring violence against vulnerable communities. Instead, the LFP calls on libraries to invest in their own alternatives and deescalation strategies, such as banning gunshot detection systems and other “police technology,” connecting patrons in need to resources rather than criminalizing their behavior, and educating workers on the societal and community impact of policing.

Macrina says: “Part of the reason we decided to make the statement is not just because it’s something that we believe in at the LFP and [that is] part of other work that we’ve done, but we didn’t see any other library professional organization taking on any of the demands of Black organizers.”

While the call to divest from police may be new for some libraries, others have been working to diminish the presence of law enforcement for years. In 2011, Denver Public Library (DPL) established a Homeless Services Action Committee to better serve the needs of patrons experiencing homelessness—a population especially vulnerable to abuse by law enforcement. Over the past nine years, that committee has advocated for and secured 10 new hires: four social workers and six peer navigators, who help address crises that might otherwise be handled by the police department.

“We’re really trying to deescalate situations and reduce our calls to 911 and to the police department by handling what we can in-house,” says Rachel Fewell, DPL Central Library administrator.

DPL also has its own security team, comprising unarmed library employees. These workers enforce the library’s use policy alongside peer navigators, who work to find solutions aligned with the library’s trauma-informed mission.

These changes came after a publicized investigation of drug use on the library’s campus. The city reacted by installing police in its buildings, instituting regular shifts at some downtown branches. While library staff bristled at this change, Fewell says the experience has allowed them to have frank conversations with the police.

“We were able to tell them, ‘When you show up in a group of six, people really don’t feel comfortable being at the library, and we really want to be a safe place for people,’” she says. “Now they understand more about what our role in the community is and that we need them to back off a little bit so that we can do the work we need to do.”

While DPL’s efforts to reduce police presence came from library leaders and administrators, other initiatives are built on the efforts of lower-level employees. According to Tonya*, an assistant at a public library in Missouri where police patrol the surrounding blocks, she and some of her coworkers have quietly taken steps to limit law enforcement presence in the library after witnessing the discomfort that some members of the community experience around police.

“We’re kind of protesting in our own way by making changes at our own branches in the ways that we can to do what we feel is right,” says Tonya. For example, the police officers that provide security to the library and other downtown buildings previously entered the library at the beginning of each shift to sign in and provide their contact information. Now library staff meet the officers outside so that they don’t enter the library.

“We’ve been having a lot of conversations about how we [have historically] used the police,” Tonya says. “We’ve been talking a lot about how we can limit our interactions, because our go-to for anything security-related was to call the officer on duty, which is not always the safest option, as we’ve seen from the news. We’re definitely having these conversations because of Black Lives Matter.”

Tonya says she thinks limiting police interaction will be a positive experience for patrons. “[Some regulars] ask why we always have police in here. They want to know if they’re in trouble,” she says. “I feel like it’ll be a better, calmer attitude over the whole library. The police don’t make everyone comfortable.”

As budget cuts loom, some libraries may be involuntarily revisiting their relationship with law enforcement.

“I’ve heard stories of library patrons not wearing masks, tearing down signs, and not physically distancing,” she says. “It’s important for us to know the plan at the university level and how to handle those situations. Do we just call public safety when that happens?”

Some libraries are working toward instituting formal procedures and employee training to limit the number of 911 calls made for drug- or violence-related events in their buildings. Redondo Beach (Calif.) Public Library (RBPL) has been doing this work for years, most recently participating in a webinar called “The Librarian’s Guide to Homelessness.” (See “The Librarian’s Guide to Homelessness,” June 2018, p. 54.) This training teaches deescalation techniques designed to help avoid police interaction and recommends that library workers call 911 in only two situations: if an incident is genuinely dangerous, or if a patron refuses to leave the library.

According to RBPL Director Susan Anderson, the training focuses on the importance of building relationships with regular patrons. “If you’re friendly and chatting when things are going well, it will seem less like you are picking on them [if you have to ask them to change their behavior] because you have built up a good relationship,” she says. Anderson also notes the training highlights the importance of body language, tone of voice, and approach when deescalating a situation.

RBPL has not yet had the opportunity to put this training to use; the library shut down because of COVID-19 just as staff were finishing the course. Still, Anderson looks forward to its implementation. “I think a lot of this training has been needed for a long time,” she says. “I’m glad to see that it’s been provided in the last few years, because it’s a skill that you have to practice.”

Anderson also says there is a low barrier to entry for many deescalation programs. She points out there are many free or low-cost tools libraries can use to learn deescalation techniques, including videos on mental health provided by the California State Library and resources developed by the Public Library Association.

Melissa Gibson, adult services manager at Scott County (Ky.) Public Library (SCPL), says that the police officers who have responded to calls for assistance at her library have their own knack for deescalation: “If we have someone who looks like they’re in some distress, I’ve got a lot of friends on the police force, and I can say, ‘Hey Nick, can you come over and check this guy?’ They know to come in very quietly and just sit and talk with them.”

While SCPL has no formal policy regarding when police should be called, Gibson says that staffers prefer to handle incidents themselves whenever possible to avoid “paperwork and reports.” Still, she asserts, “I think there’s a place for [police in the library], just like there is with any other emergency service. It’s not a racial thing. Sometimes there’s just somebody who shouldn’t be here, and they’re not listening to us.”

While safety should remain a paramount concern in libraries, police divestment advocates say that library workers should reflect on what it means to be safe in their spaces. “We want people to really think about what safety means, whose safety matters, and at what cost,” says Macrina.

And in reevaluating what it means to be safe in a library space, libraries are poised to shift the broader discussion of policing and safety in their communities.

“[The police department] just started a new program where they’re having mental health professionals respond to 911 calls, and our team really worked with them to get that up and running,” says Fewell. “If you’re a library and you take on that role for your community, you can have greater influence and change the scope of how you’re doing things in your community.” 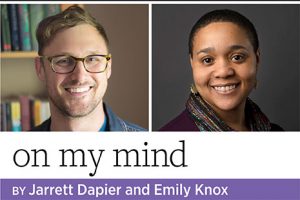 When Not to Call the Cops

A plea to protect Black patrons