When I was about 12 years old, the house next to ours was burned down. We had been cryptically forewarned. Late at night there had been a knock on the window, followed by the tip: “You should leave right now.” My mom gathered us quickly, and we took refuge in a relative’s home. By the time we returned from work and school the next day, the house that had once stood to our west was just a smoldering frame. The people who rented it had managed to escape unharmed, and we never saw them again.

I learned so much from that ruin. I learned the term flipping houses. I learned that wealthier people saw the homes in our neighborhood as “assets” but not places they themselves would ever live. But even more than that, before the property was sold to flippers, I learned about the gray market and the underground marketplace. Trades and exchanges were constantly being made in the backyard of that burned-out house. Some were scary and would cause me to run for the safety of the indoors. Others, like the nighttime dice games, would thrill me; I’d hide in the shadows listening to the singsong dice calls of betters pressing their luck. One of my favorites was “Scared money don’t make none!”

This dice call was usually accompanied by big bets and longshots—and both the ohhhs that occurred when the gambler tried and failed and the ahhhs inspired by their triumph. The call reminds me of the risks and opportunities that the American Library Association (ALA) and the larger library and information services sector face at this moment of mounting incursions on the right to read, wealth disparities, information inequity, and ongoing disinvestment and transactionality in public education and libraries.

The irony is that the very library services that current political discourse has sought to weaponize—such as collection development, reference, book talks, and storytimes—offer the greatest potential for bringing communities together through collective inquiry and debate.

Rather than being underfunded and over-scrutinized, libraries and library staffers should be recognized for their indispensable role in informal and formal public education. In a period when access to early and adult literacy education, postsecondary degrees, living wage employment, and even the most basic needs are still not as widely distributed as they should be, libraries continue to widen their scopes to fill those gaps. Rarely are they funded accordingly.

Libraries need catalytic funding and a new cadre of philanthropists and investors who understand that they are foundational social and democratic infrastructure.

Libraries need community stakeholders who understand that societies have always convened around and progressed through their greatest sources of tension. It has been the heated debates about fair wages and climate change, about housing discrimination and marriage equality, that hold up the mirror and propel us to action. None of these debates have been resolved by ensuring that everyone is comfortable. As author Salman Rushdie notes, “A mature society understands that at the heart of democracy is argument.”

I wholly agree. Merely keeping everyone comfortable is not the highest work that libraries, or that ALA itself, should strive toward. The highest work is to educate, to illuminate, to convene, to facilitate, to shorten the distance between information and action and between action and change—and to do that work boldly. In my next two columns I will focus on libraries making huge investments in their communities’ favor and on a few moonshots that ALA is taking as well.

TRACIE D. HALL is executive director of the American Library Association. Reach her at thall@ala.org.

Defying the silence and erasure of censorship 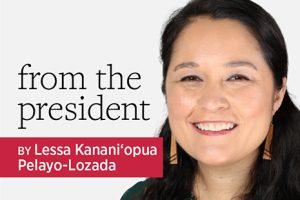 Where Do We Go from Here?

Investing in equity and collective power to build a path forward