The selections were announced February 4 at the Reference and User Services Association’s (RUSA) Book and Media Awards virtual event, sponsored by NoveList.

McBride’s novel takes place in a vibrant, multicultural 1969 Brooklyn neighborhood, and introduces readers to Cuffy “Sportcoat” Lambkin, the titular deacon and least likely of heroes. When Sportcoat shoots Deems Clemens, the boy he coached in baseball who has become a drug dealer, everyone assumes the deacon’s days of freedom are numbered. McBride creates tragedies, major plot twists, and cultural and generational clashes as characters develop emotionally while navigating a world that’s changing for better and for worse.

At the start of Fathoms, Giggs evokes depth as a unit of measurement for bodies of water and as “an attempt to understand.” With fresh perceptions and cascades of facts, she considers our ancient and persistent whale wonderment, high-tech whale hunting, global warming, mass extinction, and pollution, including the oceanic plastic plague, urging us to save the whales, the oceans, and ourselves.

“As we collectively read and discussed scores of incredible books this last year, a year of extraordinary challenges, we discovered a renewed appreciation for the power of literature,” said Bill Kelly, chair of the selection committee for the Andrew Carnegie Medals for Excellence, in a February 4 statement. “More than ever we need books that nourish the mind and heart alike. Our two winners are exemplars of this power, and it is our privilege to award them this honor.”

The other 2021 fiction finalists included A Burning (Alfred A. Knopf) by Megha Majumdar, and Homeland Elegies (Little, Brown and Company) by Ayad Akhtar.

The Andrew Carnegie Medals for Excellence in Fiction and Nonfiction, established in 2012, serve as a guide to help adults select quality reading material. They are the first single-book awards for adult books given by the American Library Association and reflect the expert judgment and insight of library professionals and booksellers who work closely with adult readers.

Carnegie Medal winners will each receive $5,000. All the finalists will be honored during a celebratory event at ALA’s 2021 Annual Conference, which will be held virtually in June. The medals are made possible, in part, by a grant from Carnegie Corporation of New York in recognition of Andrew Carnegie’s deep belief in the power of books and learning to change the world, and are co-sponsored by ALA’s Booklist and RUSA.

More information on the finalists and the awards can be found at www.ala.org/rusa/awards/carnegie-medals. 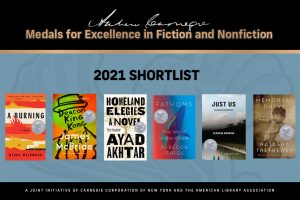 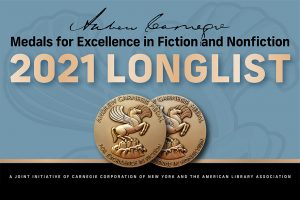