ALA President Sari Feldman was there to greet the crowd and demonstrate support of the Black Caucus of the American Library Association (BCALA) in its 45th anniversary year. Feldman discussed the expansion of the Spectrum Scholarship Program and affirmed that libraries must “reflect the diverse communities we serve.” She continued, “Libraries must not only be open to all, but we must be inviting to all.”

Feldman connected the work of the conference to “Libraries Transform,” ALA’s new, multi-year public awareness campaign. She emphasized that the profession must demonstrate that libraries are less about what we have for people and more what we can do for and with the people we have the privilege to serve. Kelvin Watson, BCALA president, echoed her words and avowed that as an African American librarian he wants to be a life changer and a community changer. He challenged each librarian assembled to be the same.

Dr. Tukufu Zuberi, best known as a host of the PBS series History Detectives, delivered the opening keynote. In his talk, the University of Pennsylvania professor of race relations and sociology examined the value of objects in constructing meaning in the world. Lamenting the limitations of a global oversaturation of Eurocentrism, Zuberi discussed how black objects become invisible in the culture and eventually in archives. He challenged attendees, “Our work is to undo the confusion of those who don’t know what they are seeing, when they see them.”

He asserted, “If they are colorblind, it’s our job to un-colorblind them.” One must see racial and cultural difference in order to appreciate it. “We must do more than putting a black face into a white space. It’s about changing perspectives.”

Zuberi also discussed his new book and showed clips from the companion documentary of the same name, African Independence. His research highlighted his belief that it is important to document and redocument the past to understand the present.

Professing librarians and archivists to be his closest collaborators, he acknowledged, “Ours is a sacred vocation.”

In closing, Zuberi affirmed that at the heart of truth is the access to information that will allow one to make sense of the past, present, and future. 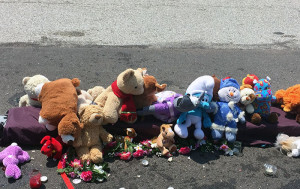 NCAAL Unofficially Begins with a Pilgrimage to Ferguson 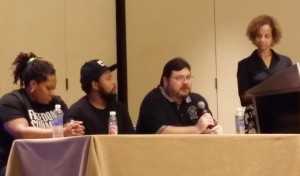