When your inner voice says you are not worthy

I’m not qualified to do this.” “I got the job because they think I’m nice.” “They must have been filling a quota.” Although the impostor phenomenon (IP) was identified as early as 1978 by psychologists Pauline R. Clance and Suzanne Ament Imes in an article in Psychotherapy: Theory, Research, and Practice, the syndrome was only recognized as a problem for many academic librarians in 2014 when three librarians at Texas Tech University published a study in College & Research Libraries.

At an April 12 session at the Association of College and Research Libraries Conference in Cleveland, Beth Martin, head of professional programs at Grand Valley State University in Allendale, Michigan, and Mies Martin, electronic resources and serials librarian at Aquinas College in Grand Rapids, described their own recent IP research. Beth Martin said IP is an “underlying feeling that you will be found out as an impostor. It creates an internal conflict that causes you to have no sense or realization of your own real success.”

She added that IP is not caused by low self-esteem. “People with low self-esteem are usually low achievers,” she said. “People with IP often work to have high achievement.” IP can also be compartmentalized, she added. You can feel like an impostor in your work life but feel appropriate success with other endeavors.

The Martins’ survey of 225 academic library leaders showed that IP:

Martin said there were numerous triggers for IP intensity in academia: the strongly competitive environment, the struggle for promotion and tenure, the uncertainty of scholarly projects, feeling like a stranger in a strange land of subject areas beyond your expertise, and the lack of mentoring. “Many people find temporary relief from these feelings of being an impostor by just trying to get through each day at a time, suppressing all feelings of inadequacy, job hopping, or through drug and alcohol abuse,” he said. “This is avoidance coping.”

A much better way of dealing with IP is “active coping, or trying to address the source of distress,” he said. Networking with colleagues who will emphasize your positive worth, confronting the negative voice in your head, and taking direct action by working longer and harder or more effectively—but without sacrificing your work–life balance.

Academic librarians can reinforce a positive sense of identity by understanding and welcoming professional norms (committee work, publishing research, teaching), establishing a professional identity with association work and service to the community, and finding a comfortable place within the research community that will stifle the inner negative voice.

The presenters said that much more research is needed in IP and welcomed the audience to construct their own studies. 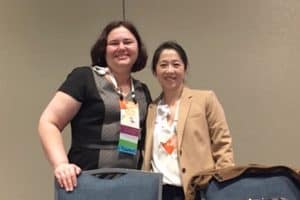