Each year at ALA Annual Conference, the Games and Gaming Round Table, along with the ALA Comic Book and Graphic Novel Member Initiative Group, put together an evening full of fun and learning where the gaming, graphic novel, and cosplay communities collide. This year’s event—at Caesars Palace in Las Vegas on June 27—was the biggest event to date, signaling a tipping point for both the event and GameRT.

Last year, the event explored partnering with major gaming publishers, taking advantage of the presence of Paizo Games on the exhibit hall floor with Diamond Publishing. This year, along with Paizo, several other publishers are present, showcasing and allowing attendees to play their games.

HL Games, the publishers of Word Winder, a word-search game designed by David L. Hoyt of Jumble fame, had a giant version of its game for attendees, who got to kick off their shoes and get spelling. 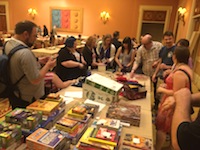 Eagle and Gryphon Games brought out several tables full of their games and had on hand one of their main designers, Alf Seegert, who walked people through many of his designs, both current and upcoming. Be sure to check out Seegert’s presentation on the Graphic Novel / Gaming Stage in the exhibit hall on Saturday at 1 p.m.

Mayfair Games had a number of titles for demonstration, including its wildly popular Star Trek Catan, a sci-fi re-theming of the award-winning Settlers of Catan board game.

Lastly, Set Enterprises was busy showing off a wide selection of games, including the SET board game, Quiddler, and its newest game, Karma.

The presence of game publishers is a strong move forward for the event, exposing librarians to the wide range of games and play resources available for using their programs but also showing to publishers the interest and enthusiasm the library community has for gaming.

Peppered among the gaming raucous were other islands of interest. Scott Nicholson had his face-painting stand open for business, adorning the faces of attendees with third eyes and butterflies. Matthew Murray had a graphic novel readers’ advisory machine that he built using a Raspberry Pi machine that dispenses printed recommendations.

There was also a Comic Jam collaborative comic going where attendees could add to crowdsourced strips, many of which were initiated by illustrators from Artist Alley on the exhibit floor. Librarian P. J. Bentley shared information about a gamers’ advisory program at his library in Portland, Oregon.

And photographer Kyle Cassidy snapped photos of librarians to extend his project that was featured on Slate in February. Cassidy ran a successful Kickstarter campaign to raise funds to attend Annual to take more photographs and turn the event into a documentary, narrated by author Neil Gaiman.

The evening was a huge success thanks in large part to the hard work of those involved in planning and promoting, along with the ever-growing support and interest of the library community in all things gaming.

BRIAN MAYER is a gaming and library technology specialist. He designed Freedom: The Underground Railroad (Academy Games, 2013) and is coauthor of Libraries Got Game: Aligned Learning through Modern Board Games (ALA Editions, 2010). He is passionate about using modern board games to engage students, build literacy, and strengthen social skills … plus he really likes to play games! 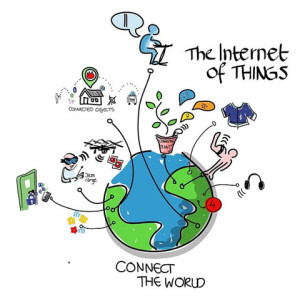