“What is the fate of the public in an age of individual choice?” That’s the central question posed by Cherian George, journalist and professor at the Wee Kim Wee School of Communication and Information at Nanyang Technological University in Singapore. George’s speech launched the fourth day of IFLA’s 79th World Library and Information Congress. George spoke passionately about the failure of the press and news media to “speak truth to power.” Instead of truth, he said, the media is delivering what humorist Stephen Colbert calls “truthiness,” telling people what they want to hear—what reinforces their biases and makes them “feel smarter than they are.” Fox News is propaganda that makes viewers impervious to evidence and truth, George said.

George was also tough on educators, arguing that “those of us in the business of public knowledge have been too complacent,” stuck in a kind of “professional detachment and passivity.” Making information available is not enough to meet the moral challenges society faces, he said. In the “information wars, we may be on the side of truth, but being on the side of destiny is another matter.” He recommended two books during his talk as essential reading: Media and Morality: On the Rise of the Mediapolis by Roger Silverstone and The Net Delusion: The Dark Side of Internet Freedom by Evgeny Morozov.

The International Federation of Library Associations and Institutions (IFLA) also announced that its successful Building Strong Library Associations program will expand through a series of convenings and projects at the regional level in Africa, Asia, and Oceania, and Latin America and the Caribbean. These regions have a rising demand for library services that can support their growing needs in education, literacy, information for the community, and access to electronic information services and delivery. The program also aims to help libraries secure their services and access to information within government legislative frameworks.

The afternoon featured a variety of programs and papers presented by librarians from around the world, exploring “indigenous knowledge and multiculturalism in LIS education and library training,” “open access to official and authenticated legal information in Asia,” “young adults in libraries,” “hot topics in academic and research libraries,” and a number of other topics. IFLA’s volunteer web editors gathered for a training session, and Skip Prichard, new CEO of OCLC announced the IFLA/OCLC fellows for 2014. At the IFLA Highlights session where the announcement was made, Genievieve Clavel-Merrin talked about a three-year Governing Board project to identify cultural heritage at risk of destruction through natural disaster or political conflict, and Victoria Owen of the IFLA Professional Committee urged delegates to lobby their nations to adopt the World Intellectual Property Organization’s Marrakesh Treaty (PDF file) whose accessibility provisions benefit users who are print disabled.

In the afternoon, 14 delegates led by Philippe Colomb of France gathered for an organizational meeting to discuss the formation of a gay, lesbian, bisexual, transgendered, and questioning special interest group (SIG). Approved by the IFLA Professional Committee, the exploratory meeting is the beginning of a process that may result in the actual creation of IFLA’s 16th SIG. First, however, the group must find a host section and gather signatures of support. Rae-Anne Montague and Lucas McKeever of the University of Illinois at Urbana-Champaign volunteered to be co-conveners of the first SIG session, which is being planned for IFLA 2014 in Lyon, France.

Tuesday ended with an all-conference cultural evening, a beach party with Singaporean food and entertainment at the Tanjong Beach Club on Sentosa Island. 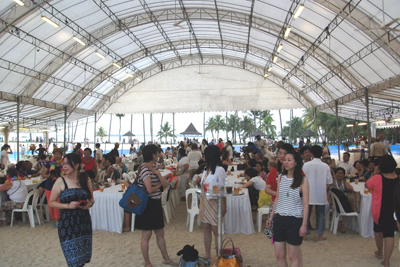 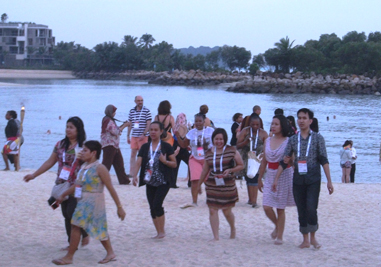