On February 11, the Library of Congress hosted a party celebrating the 20th anniversary of the landmark 1996 Telecommunications Act. The event was coordinated by Colin Crowell, a former member of Massachusetts Sen. Ed Markey’s staff and current head of global public policy for Twitter, and was attended by members of Congress, senior Hill staff, tech leaders, Federal Communications Commission (FCC) staffers, and of course, librarians.

All week leading up to the event, this diverse group of stakeholders flooded the web with celebratory tweets using the hashtag #96×20, thanking the Telecom Act for connecting libraries and schools, enabling innovation, and fostering competition. To further highlight the library message about how the Telecom Act, especially the E-Rate Program, has fueled the services libraries provide, American Library Association (ALA) members added #librariestransform to the tweets.

Among the many luminaries who spoke were former Sen. Trent Lott (who served as emcee) and Markey.

Twitter heightened the celebration with the presentation of an inaugural Access to Opportunity award, recognizing former Sen. Jay Rockefeller (D-W.Va) and Sens. Olympia Snowe (R-Maine) and Markey for their foresight and leadership around passage of the Telecommunications Act. Markey received his award in person. Former Maine State Librarian Linda Lord, past chair of ALA’s E-Rate Task Force, accepted the award on behalf of Snowe, noting that she was “humbled and extremely honored” to do so.

Lord said she delighted in “having worked on the ground floor to help institute the E-Rate Program in Maine,” emphasizing the “life-changing impact connectivity in Maine schools and libraries has made for the people of Maine.”

FCC Chairman Tom Wheeler spoke on the historic significance of the legislation: “The Telecom Act of 1996 was a kick in the pants that focused and accelerated trends that had been percolating in both congressional and FCC policy debates. The Telecom Act recognized the importance of access to networks. The establishment of E-Rate connected America’s schools and libraries to the internet.”

Referring to the impact of the Telecom Act and the E-Rate Program that resulted, ALA President Sari Feldman said: “In 1996, only 28% of public libraries provided public internet access, compared with more than 99% [that] report this today. Great thanks to Sens. Rockefeller, Snowe, and Markey for their foresight in enabling these strides in both public access and innovation.” 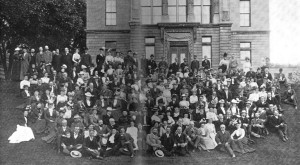