Emerging Leaders and the New Girl

“30,000 librarians?!” This was the astonished reply I received when telling my friends the estimated number of ALA Annual Conference attendees in Las Vegas. They are not alone in their surprise. As a first time conference attendee, I can understand how easy it is to feel overwhelmed by the magnitude of this event; there is so much to see and do that it can be daunting. And so I approached the Emerging Leaders Poster Session on Friday with equal parts trepidation a 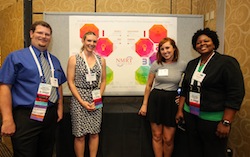 nd gusto, eager to make connections with fellow librarians who have knowledge to spare.

Every year the selected class of Emerging Leaders are tasked with working as part of small teams to complete a project on behalf of one of ALA’s many divisions and round tables. This year’s teams presented posters on everything from advocating for youth services access (for ALSC) to strategizing a social media plan (for ALCTS). It didn’t take long for me to become interested in what these leaders had worked on in the past six months. Passion and warmth oozed from everyone I spoke with, and a short blackout didn’t temper the engagement between presenters and session attendees.
Because of my newb status, I was immediately drawn to two different group projects, both completed for the New Members Round Table (NMRT). The first project—”Creating a New Members Round Table Membership Promotion Video”—is exactly what you think it is. Tameca Beckett,Tegan Davis, Laura Miller, and Shawn Walsh spoke to me about creating a timeless infomercial-style video to use in promotion of NMRT. The services provided by the round table are vast: NMRT offers scholarships toward attending conference; provides conference mentors; career services; and guarantees committee appointments to interested members. The video highlights members speaking on the benefits they have received by being a member of the round table.
The second project was “Development and Marketing of NMRT-Branded Merchandise,” which looked at how NMRT can raise money without raising dues. Currently, membership to NMRT is only $10, which should be music to all budget-conscious ears. The project team—Laura Arnhold, Erin Berman, Erin Huffman, and Katie Tkacik—conducted research, did a SWOT analysis, and created of a detailed marketing plan to propose rebranding NMRT through a new logo and slogan. They also explored the idea of branded merchandise and instructional webinars as an avenue for raising funds.
I look forward to seeing what NMRT adopts from these two presentations. The round table has a bevy of great ideas to chose from, and it’s encouraging to see that those who run NMRT are actively engaged in both promoting and developing the group, as a whole, as well as its members. Consider me converted.
A special thanks to everyone who took time to speak with me about their poster. If you’re interested in applying for next year’s Emerging Leader class, applications are due August 1. Find information on joining NMRT here.
JENNIFER PETTI is a recent Kentucky graduate and enjoys mac and cheese. Like, a lot. You can find her shelving books in Seattle, as well as tweeting and tumbling @sassafrassj. 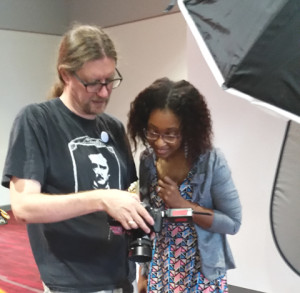