Kanopy, the online video streaming service for educational institutions, hosted an engrossing program on Saturday at ALA Midwinter showcasing three documentary films that confront vital issues impacting the US and libraries today—gun control, slut shaming, and racial identity. Short clips from each film were presented, followed by discussions with the filmmakers, each of whom revealed the extremely personal and turbulent stories behind their films’ creations.

An unthinkable tragedy led Colin Goddard, the subject of Living for 32, to become a filmmaker. The title of the film references the 32 people murdered in the mass shooting that devastated Virginia Tech in 2007. Goddard was one of the survivors. (He was shot four times, and three of the bullets remain in his body.) Government inaction to continued mass shootings in the years following the attack spurned Goddard to action and advocacy work. But there was also a personal element.

“Why did this happen?” Goddard said he asks himself about the Virginia Tech shooting. “I’ll never know why because the gunman (Seung-Hui Cho) killed himself.” Instead Goddard tried to understand how the shootings occurred and document the process in film. His tactics included going undercover to gun shows to buy guns without a background check. The ease with which he could acquire the weapon shows just how broken gun control laws are in the US, he said.

Goddard was blunt when addressing guns and active shooter drills in schools. “It’s alarming to think that due to legislative inaction on gun control, the onus is on teachers and librarians to deal with it,” he said. “It’s a sad state of affairs.”

A traumatic experience led Emily Lindin to her film, as well.

As an 11 year-old girl, Lindin was called a “slut” by her classmates. Why? Only because she developed physically earlier than her peers. The word and its associated stigmas attached to her, she said, making her a social pariah growing up. When Lindin heard the tragic story of Rehtaeh Parsons, a 17 year-old who committed suicide after being called a “slut” repeatedly following a gang rape, she decided to start the Unslut Project to offer a collaborative space for people to share stories about slut shaming and sexual bullying.

Lindin began by posting online her childhood diary that chronicled her own harassment, with hopes that it would provide perspective for others. The positive reaction led to a book and film, both titled Unslut, detailing the project as well as tragedies that have resulted from slut shaming.

“One rumor, one misstep, or one person who looks at you the wrong way and your reputation can be ruined,” Lindin said. “All of us as women live with a constant fear that one word could come crashing down on us and change everything.”

In the film Little White Lie, director Lacey Schwartz laid bare her own family story, revealing an unspoken family secret that led her to question her racial identity in the process.

Schwartz grew up believing that she was white. She was from a typical Jewish family in New York and had identified as such throughout childhood. At age 18, her world changed when she learned that her biological father was black. It caused Schwartz to question everything—her race, family, religion, friendships—and live with a dual identity.

Schwartz said that her family was in a deep state of denial then. The extramarital affair that resulted in her birth had been a family secret for decades. She decided to crack the seal on that secret and confront it head on in a film with hopes that it would answer questions about her identity and lead to familial healing. The resulting revelations were tough, she said, but crucial for her and her family’s well being.

“I felt like I couldn’t move forward in my life until we dealt with these family secrets,” she said. “Holding them in is damaging.”

Schwartz hopes that the journey in the film has a universal appeal. “It’s about the need to have conversations,” she said. “I want people to leave screenings thinking less about me and more about themselves.” 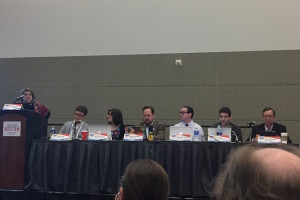