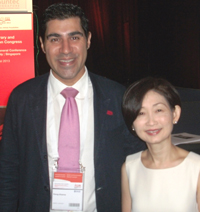 Geo-strategist Parag Khanna, bestselling author of How to Run the World: Charting a Course to the Next Renaissance, asserted that the great ages of mankind are the Stone Age, the Agrarian Age, the Industrial Age, and the Information Age; but now, he said, we are entering the “Hybrid Age,” a time when technology is erasing boundaries in education and enabling educators “to use interactive tools to produce better scholars.” Khanna opened the fifth day of the World Library and Information Congress of the International Federation of Library Associations and Institutions (IFLA) in Singapore August 21 with enthusiasm for “ubiquitous libraries.”

“Libraries must mirror what happens in the classroom and online learning,” said Khanna. At the same time, libraries are community centers, public sites that can teach digital literacy. Radical changes are going on in online education, he said. “Georgia Tech is offering a full computer science degree for $6,600.” He characterized librarians as “knowledge curators” who stand to benefit from the “disaggregation” of universities. He recommended David Weinberger’s book Too Big to Know: Rethinking Knowledge Now that the Facts Aren’t the Facts, Experts are Everywhere, and the Smartest Person in the Room Is the Room.

The IFLA conference in Singapore continued with a day of papers and programs that focused on such topics as “museums and archives in a global context” and “libraries, readers, and book culture in Asia.” The IFLA congress also offered delegates eight different tours. Today’s half-day visit to World War II sites included the Changi Museum, which preserves the history of the thousands who were tortured or killed in prisoner of war camps during the Japanese occupation.

Wednesday’s activities concluded with the General Assembly, the federation’s annual business meeting. IFLA President Ingrid Parent of Canada presided, and voting delegates heard from Treasurer Donna Scheeder of the United States that the federation ended the year with a budget surplus of 183,385 euros. The black ink was brought about by, among other things, IFLA’s adoption of a new conference business model and higher-than-expected membership revenue and sales and royalties, combined with expense cuts. Scheeder’s spreadsheet showed total income at 1,912,989 euros and expenditures at 1,729,604 euros.

Delegates learned that IFLA Secretariat Jennefer Nicholson’s contract has been renewed and that she will continue to head operations at headquarters in The Hague until 2016. “This is the best job in the world,” Nicholson said. Election results showed that US delegate Loida Garcia-Febo had been elected to the IFLA Governing Board. Ex-officio members will include US delegates Lynne Rudasill, chair of the Professional Committee, Division II (Library Collections) Chair Russell Lynch, and Division IV (Support of the Profession) Chair Clara M. Chu.

The IFLA conference in Singapore continues through August 23.