Learning with comics and graphic novels

“Why should educators care about comics?” National Ambassador for Young People’s Literature Gene Yang asked during Friday’s multipart forum on comics in the classroom.

The sessions were hosted by Pop Culture Classroom, the Children’s Book Council, and the French Comics Association (FCA).

Yang, a MacArthur fellow and graphic novelist who also taught high-school computer science, used to tell his students that he also drew comics because he thought it would make him cool. It did not. But it did give him unique insights into how students learn and integrate new ideas in the 21st century.

In one of his algebra II classes, he started drawing his lectures as comics and noticed that “students preferred me in cartoon form over my flesh-and-blood self.” They also liked the comics better than the video lectures he made. Yang surmised that because comics are a visual medium we have to read, they allow the reader control over the flow of information. Other visual media, like videos, are fleeting, and the rate of information flow is in the control of the creator.

The grammar of comics

The connection between image, text, and reader was echoed in the next session, “The Grammar of Comics: How Teaching Visual Literacy Can Open Up New Conversations.”

Pascal Mériaux, a librarian representing FCA, called comics the “nowhere land” between art and literature. “Comics have an original grammar,” he said. One person “writes” the images, one “draws” the text, and the reader creates a gateway from one image to another, making a different story for each person who encounters it.

Adam Ebert, a reading teacher at Bloom High School in Chicago Heights, Illinois, incorporates comics and pop culture into his classroom to encourage reading. He said the key is to cast a wide net—superhero comics, historical graphic novels like March, Raina Telgemeier books—to find something that will appeal to any reader. His colleague, Adan Avarado, who teaches media literacy, works with his students to comprehend memes, social media, comics, and song lyrics as well as traditional texts.

He advised having a how-to with students on reading comics. Focus on what they should look for, the way you would with novels or poetry. Teach them how to read this format, such as why events are shown or not shown.

The session “Problem Solving: Teaching STEM with Comics” looked at how educators and librarians can use the intersection between comics and technology. Panelist Mike Espinos, a middle-grade robotics teacher and comics writer, explained that kids communicate through images—sketches, emoji, memes, GIFs—so comics are a great way to reach them: “They may not have technical literacy, but they have visual literacy.”

Jim McClain, a cartoonist and publisher who also teaches 7th-grade math, uses comics to illustrate concepts in his classroom. Students help heroes come up with a list of prime numbers to stop a bomb from exploding or figure out the sugar content of soda created by a villain called the Confectioneer.

Comics can also be used to explain social-justice issues in the classroom, according to the panelists in “Books that Spark Change: Using Comics and Graphic Novels As a Jumping-Off Point.”

Moderator Eric Kallenborn of Pop Culture Classroom praised books like the March series and panelist Guy Delisle’s books on traveling in North Korea and Burma, as well as panelist Marguerite Abouet’s Akissi and Aya books about girls growing up in Ivory Coast.

Russell Guldin, a former English teacher who is now a high-school librarian in the Chicago area, explained how visual images create empathy. Going panel-to-panel in a comic allows the reader to infer parts of the story, and inference is good way to learn.

Jason Nisavic, a Chicago-area high-school government teacher, says comics and graphics novels can also humanize large, impersonal topics and help readers learn quickly: “You can go from being completely ignorant on a topic to being very informed in an afternoon.”

On books as ambassadors: 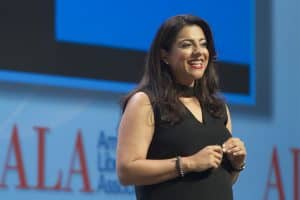