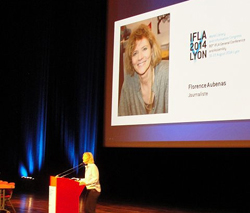 Sometimes, low tech trumps high tech. At Tuesday morning’s plenary session of IFLA’s World Library and Information Congress 2014 in Lyon, French journalist Florence Aubenas talked about her kidnapping and six-month imprisonment in Iraq in 2005 and the time since. “Very often, the countries at war create conditions that prevent us from using technology tools,” she said. “It’s better sometimes not to use our computers. It’s like dynamite in your bag [due to hacking]. You can be located because of your mobile phone.” She had to go back to using a notepad and pen to write her observations and stories, and relied on guides to help her locate sources, rather than using her cellphone or going online.

She recalled when the press used to put a flag on their car, like the Red Cross, to declare their neutrality. But then the press became suspect. “Today, [the press flag is] a danger.” When she was held hostage, her captors repeatedly said she was a spy, and when she asked them to look up her work and her articles, they replied that they didn’t care. “My whole profession was denied,” she said.

From 2009 to 2012, Aubenas was president of L’Observatoire International des Prisons (the International Observatory of Prisons), which promotes decent conditions in prisons and rights for detainees, and she spoke a bit about that. Though each place is unique, a library in prison “is more than a library, it’s a place where people can meet.” she said. “It’s become a place for writing because many in prison are illiterate.”

Tuesday was also the second day of poster sessions, another low-tech source of information, even when the projects described were high tech. Attendees shared projects and solutions to problems ranging from how to get teenage boys to read in Japan to using recollections and giving patrons cameras to collect information about how to design better library services in Finland. 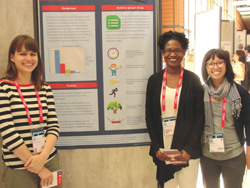 Three librarians from the University of Illinois at Chicago presented a poster on using Google Forms to work with college students on assessment and collaboration. Mireille Djenno, Glenda Insua, and Annie Pho used the versatile forms to collect information from students on how and what they were researching for coursework in their English 161 class . “No one’s name was associated with it, and as a result, it added another degree of freedom [in sharing],” said Djenno. “I really like how you engage students as it (Google Forms) is actively populating.” The tool allowed for real-time, data-driven adjustments and helped provide database examples with student-supplied keywords.

The city of Lyon, known as the gastronomic capital of France, offered wine sampling and a display on the silk trade for which the city is also famous. A local boutique brought live silk worms at various stages of life from pupae to larvae to fledgling worms to those making cocoons. 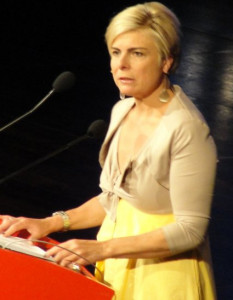 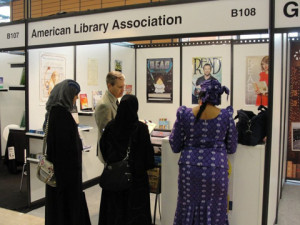