ALA Council met for its third and final session at the 2014 Annual Conference and Exhibition on Tuesday, July 1.

The Intellectual Freedom Committee presented 14 action items (CD#19.3–19.17) as revisions to the Intellectual Freedom Manual, which is set to be published later this year. After a motion to refer the section on labeling and rating systems (CD#19.12) failed—though not without much discussion and in a very close vote—Council passed the package with an edit to CD#19.11 as a matter of housekeeping. The 10th bullet point, which details “a service philosophy . . . that affords equal access to information for all in the academic community with no discrimination” adds two groups: people with gender identity issues or with sensory or cognitive disabilities.

Council heard from the Committee on Legislation and passed two action items on the Digitization of US Government Documents and Reaffirming Support for National Open Internet Policies and “Network Neutrality” (CD#20.6 –20.7).

Council approved CD#40.1, adopting Copyright: An Interpretation of the Code of Ethics. It also heard a report from the International Relations Committee and passed a resolution that directs ALA to become a signatory to the Lyon Declaration on Access to Information and Development (CD#18.1–18.4).

The PBA winners who are Councilors at Large were Loida A. Garcia-Febo, Matthew P. Ciszek, and Ismail Abdullahi. The Chapter Councilor winners were Stephanie Braunstein and Regina Greer Cooper.

ALA Executive Director Keith Michael Fiels reported that Annual Conference attendance was 13,019 registrants and 5,607 exhibitors, for a total of 18,626. 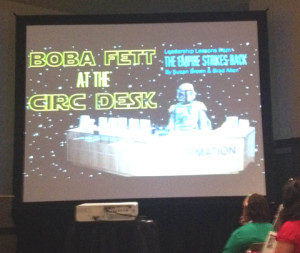 Boba Fett at the Circ Desk 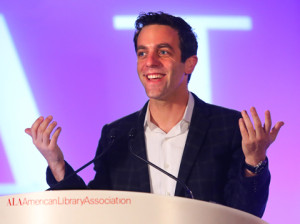