Learning to Lobby for Your Library

Day Three of the ACRL conference

At the third day of the Association of College and Research Libraries (ACRL) conference in Baltimore, the national political climate again featured prominently, with attendees filling a town hall meeting on strategies for working with members of Congress. Other big topics for the day included technology, the ACRL Framework, and social justice issues.

In “Where Do We Go From Here? The Role of Special Collections in Collecting Social Media Content,” Petrina Jackson, head of special collections and university archives at Iowa State University (ISU) in Ames, described the challenges and rewards of becoming active collectors of social media content. “Just because the format is digital doesn’t mean it isn’t the job of special collections to collect it,” she said.

Jackson said she decided to become an archivist after seven years teaching English at a community college because she wanted to ensure that voices not traditionally included in archives and special collections were represented. Social media platforms provide a more democratic narrative—Twitter has been vital to social movements such as Black Lives Matter and the protests at Standing Rock, for example—but archiving this material is challenging on many levels.

Her first exposure to these challenges came in 2012 while working at the University of Virginia (UVA). President Teresa Sullivan resigned suddenly, and communications from her office ceased. Campus librarians began collecting online communications to figure out what was going on and preserve this information as part of the school’s historical record. UVA’s digital archivist found a rudimentary tool that harvested tweets but could only gather a limited number at a time. The tweets themselves provided access to links, blog posts, memes, and YouTube videos. (Jackson noted that it is not legal under copyright law to save YouTube clips—there is still much work for archivists to do in this area.) Throughout this situation the library felt pressured to collect social media information without help from the university’s other technologists, whose departments were not set up for this sort of triage. Although Sullivan was reinstated two weeks later, many records are still not accessible to researchers who want to study this moment in UVA history. This dilemma is not unusual.

Jackson spoke with Bergis Jules, community lead for Documenting the Now, to get best practices for how to collect born-digital material and evaluate its significance. “Staying with the scope of one’s collection focus is the best approach,” he said. It’s also imperative to get to know the author of the tweet or post, get permission, and provide context.

Jackson provided two recent examples from her work at ISU. The first was an eyewitness-posted Tumblr account of a silent protest during a tailgate for a GOP presidential candidate before a football game. Someone in the crowd began shouting racial slurs, and another person tore a protester’s sign. The Tumblr post contains verbatim quotes, and the ISU digital archivist captured it but did not get permission from the author, so although it’s a great source, it still can’t be shared publicly because of the archivist code of ethics.

In another example, a first-year student at ISU agreed to donate her Facebook post about a recent demonstration on campus. But Jackson started to have reservations about taking the post and making it accessible, thus exposing the student to open comments and possible surveillance. The school has no in loco parentis laws, but Jackson felt responsible to the student, who was not a leader of the demonstration and had still not completed her first year of school. “I know it’s not my role to mediate this, but I’m still hitting pause,” Jackson said.

These are some lessons she has learned on collecting social media:

Jackson concluded by saying the mission of special collections makes it uniquely responsible for collecting social media content by expanding narratives. “To ignore this material is at best a missed opportunity and at worst reinforces the dominant narrative.”

ACRL President Irene Herold hosted a special town hall–style meeting arranged after the announcement of President Trump’s budget blueprint proposal, which eliminates funding to the Institute of Museum and Library Services (IMLS) and other agencies that fund university programs.

Corey Williams, librarian and lobbyist at the National Education Association (“the other NEA,” she joked) and former senior lobbyist at the American Library Association, gave the packed room effective ways to engage with members of Congress. “What I do is what you can do,” she said.

Find out who is on committees for the issues that affect your work and plan to have continual engagement with those members at variety of levels—set up meetings with them, email their staff members, and call them regularly. “Our responsibility is to let our elected officials and their staff know what issues are important,” Williams said.

And don’t be scared—as librarians, you regularly engage with people you don’t know. This is just like that. “They’re human beings. They’re from our communities. They work for us. We elected them. We can unelect them.”

Don’t be afraid to reach across the aisle, either. “Treat every member of Congress as an individual, and don’t make assumptions about party affiliation,” Williams advised. You may find you can work with an elected official on an issue that’s important to you even if you disagree on others. It’s important to talk to staff members, too—they are policy experts, and it’s their job to keep members of Congress informed about issues.

Williams offered several tips for building relationships with your senators and representatives.

If you are from a state with senators and representatives that support your issues, show your thanks. They still need to build coalitions with others and need constituent input.

Advocacy is a muscle, Williams said. You can flex it once, but this is a marathon, not a sprint. You’ll have to get in shape and exercise continuously.

Like many fields, librarianship has done much to increase recruitment of minorities. Unfortunately, like many fields, those efforts are still not reflected in leadership positions. Antonia P. Olivas, education and sociology librarian at California State University San Marcos, examined the problem in her presentation, “Should I Stay or Should I Go: the Motivation of Underrepresented Minority Librarians to Lead.”

Olivas wrote her dissertation on the topic, looking specifically at Latinx and African American motivation to lead. She expanded her thesis into a book, Choosing to Lead: The Motivational Factors of Underrepresented Minority Librarians in Higher Education.

Her presentation focused on a qualitative study, featuring interviews with African American, Native American, Asian, and Latinx librarians about why they stay in the field and what motivates them to want to lead others.

Citing the theories of intrinsic versus extrinsic motivation developed by management theorist Daniel H. Pink in Drive: The Surprising Truth about What Motivates Us, Olivas found that, regardless of race or ethnicity, leaders were all motivated by intrinsic factors such as autonomy, mastery, and purpose. She also found that leaders had a desire to want to lead but were not born to lead—leadership traits are learned and change over time.

From her interviews, she found that what motivated these leaders to stay on the job included wanting to make positive change, pave the way for others, pay back those who helped them, and pay forward through mentoring. They shared traits of self-confidence and persistence, and they especially enjoyed networking outside their libraries, such as at national conferences. “If they want to see another person of color at work, they go into the bathroom and look in the mirror. Hey, there I am again!” Olivas said. Conferences let them see others like themselves.

Another emerging theme was that every interviewee said they were “quiet leaders.” They don’t feel like they mesh with their organization’s leadership style. Several also said their families, ethnic, and socioeconomic backgrounds were the reasons why they took on leadership roles.

In addition, these leaders said they were challenged more by their peers and had to work harder. Others often got credit for their ideas. One interviewee said she was not yet done with the profession itself, but was frustrated with cronyism at her institution. All felt a responsibility to represent their group because there were few people of color in similar roles. Some feared that taking on more leadership responsibilities would separate them from students.

Olivas concluded that the motivating factors for becoming leaders change over time. To encourage more leadership among minority librarians, current library leaders must check their unconscious biases, make librarians feel valued and respected, and develop all types of people for leadership roles. 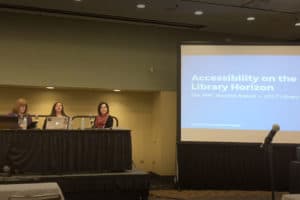