A campaign finance reform bill that would ultimately affect Michigan residents’ access to campaign information was roundly criticized by librarians across the country this week. Senate Bill 571 was passed on December 16, with several last-minute amendments from the House that included a provision that would prevent government employees from using public funds to distribute information about a local ballot proposal 60 days before it appears on the ballot.

“While the intent of the Michigan legislature may be to ensure that government employees are proper stewards of public funding, in actuality this broad-sweeping bill prohibits one of their public bodies—the library—from doing one of its main jobs: providing the voters of Michigan unbiased access to information, including factual information about local campaigns and ballot measures. On behalf of librarians around the country, I urge the governor to veto this bill,” says American Library Association (ALA) President Sari Feldman.

In addition, public employees violating this ruling could be fined anywhere from $1,000 to $20,000 and could be imprisoned.

Gail Madziar, executive director of the Michigan Library Association, tells American Libraries, “We are worried that this could be expanded through judicial interpretation to prohibit librarians from discussing a millage election at the reference desk or communicating with even one patron.”

Nearly 80% of funding for libraries in Michigan comes from dedicated millages, and eliminating the ability of libraries to share facts about how those funds would be used puts a damper on transparency and leaves voters uninformed, she says.

Madziar says that although the bill has been passed, it still hasn’t landed on Gov. Rick Snyder’s desk for his signature. Once it does, most likely in early January when the state legislature is back in session, he will have 14 days to sign it. “We are willing to work with the governor’s office to make the legislation more transparent and appropriate,” she notes.

In the meantime, MLA and ALA are urging Governor Snyder to veto the bill. MLA distributed an advocacy alert directing its members to its Engage site, powered by ALA. The site provides talking points and the information needed to contact the governor. Madziar says that more than 700 people have contacted the governor’s office so far. 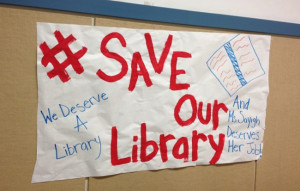