This interview was first published in Booklist’s August 2020 issue.

A historical novel set in Trinidad in 1796 and the Crow Nation of the Great Plains in 1830, Francis-Sharma’s second novel (after ‘Til the Well Runs Dry) follows the struggles and adventures of Rosa Rendón, who pushes back against the restraints associated with her sex and race, ultimately marrying a Crow chief and having a son who must learn her secrets to become wholly himself.

In her starred Booklist review on April 15, Vanessa Bush writes: “Francis-Sharma offers fascinating characters across the broad sweep of the American continent at a time of great tumult: warring colonial powers, the spread of slavery, and expansion West. This is a compelling saga of family bonds, ambitions, and desires, all subject to the vagaries of powerful historical forces.”

Although Book of the Little Axe is a historical novel set in the 1800s, it strikes me as being really timely because it illustrates the complexities of race relations then and through to this very day. How did you come to write this book?

I wasn’t sure that this thing that’s happening to us now was actually going to happen, but on some level it’s always been happening. I was thinking about a story of migration and community, and this world of multiculturalism. Because ultimately, there are so many people that intersect in this novel. I really wanted to explore what the world looked like at this time, and what impact the colonial powers had on this very small island in the middle of the Caribbean. I felt like history, in some sense, was itself a character. And, of course, what happened in the Caribbean ended up happening in continental North America and the United States. History is sort of chasing my character. There is something right and very resonant about history always chasing us.

I enjoyed the complexity, because we often think it’s a Black/white dichotomy in America and that has never really been true. It is much more complicated, including how it seems as though people are scrambling not to be in last place and that causes them to act out and do the things they do. I can see that clearly in this novel.

As I was reading and doing the research for this book, it occurred to me how many people from different places have come into the frame to build this world. In Trinidad, for instance, we have Africans, Spanish forces, and then the French and British coming in. With America, it’s very similar. The forces blend, and people end up working in some weird way and living together, and their languages become blended. When you think about it, that has been true since the beginning of time, and it’s true now.

I so much appreciate the research that went into this. You can feel its presence in your characters’ lives. We don’t always understand just how much was going on privately as people tried to live their lives while powerful forces were making historical change.

When you look at this period, it’s really easy to get mired in what’s happening in Europe and with European colonial forces. We forget about all this other stuff happening in North America with Native Americans and African Americans. What was really fascinating for me was to see how the push for the end of slavery had incredible ripple effects.

There’s a lot in your book about knowing your place. You have your protagonist, Rosa, bristling at the limitations she faced in Trinidad because she was a woman. You also bring in the constraints associated with race, class status, and color. Why was it important to examine the notion of knowing your place?

I’ve tried in both of my books to explore this idea of everyday people struggling against social forces. Yes, Rosa is not only dealing with being a Black woman on an island that’s about to be taken over by the British, and one that also enslaves African people who look very much like her; she’s also having to deal with gender issues and colorism. Whether she knows it quite at every moment or not, she is seeking some way past gender and past her race just to be to be able to live free in the way she wants to live. She’s a rugged farm girl who loves the land and loves horses. Her father realizes that this land that he has cultivated and loved might not stay in the family. It probably should go to Rosa because she knows how to maintain it, but he cannot legally pass it on to her. The only way he can do this is if she marries. So that becomes a big part of the story, and this just drives her crazy.

Edward is such an important part of the story. He’s a real-life character I found in my research. He’s a Native American chief, and he’s also Black. He sees Rosa in a way that she hadn’t been seen before. That really allows Rosa to blossom in this North American world that she’s had to build for herself. Then her son, Victor, is being raised as part of the Crow Nation, but he’s a Black boy who doesn’t quite inhabit that world fully, in part because he has no idea about his family history.

VANESSA BUSH is a freelance reviewer for Booklist. Browse her reviews here. 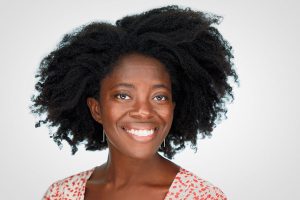