The Library Information Technology Association (LITA) hosted LITA AvramCamp, a one-day camp for women in technology, on June 23. Held immediately before the American Library Association (ALA) Annual Conference and Exhibition, the event was named after Henriette Avram (the computer programmer and systems analyst who developed the international data standard MARC) and modeled after another, similar conference known as AdaCamp.

A multi-racial, multi-lingual group of nearly 40 women gathered on the campus of Northwestern University in Evanston, Illinois, for a day of discussion around the roles and challenges of women in library technology. Out of respect for the privacy of the attendees, individual names and other specifics will not be shared.  The intent was to create a genuine safe space where everyone could speak freely.

The event began with a discussion of imposter syndrome. Other topics ranged from casual sexism to unconscious prejudices. During discussions, attendees bonded over shared experiences and talked about the importance of encouraging those around you, sharing your failures in addition to your successes, mentoring, and being kind. The group worked through a variety of exercises, including writing and claiming compliments. Everyone shared kind remarks and left with a stack of encouraging words from others.

The heart of the camp, however, was a series of breakout sessions. Brainstormed by attendees in the morning, the afternoon featured small-group talks led by attendees and organizers. Among the topics addressed were negotiation, compassionate leadership, career advancement, self promotion, and “being a better bitch.” Attendees shared stories of struggles and accomplishments, gave advice, offered tips, and cracked jokes.

The camp ended with a series of short presentations by individual members about mentoring, feminist leadership, block chains, and codes of conduct.

ATHINA LIVANOS-PROPST is the digital librarian for PBS Education in Arlington, Virginia. 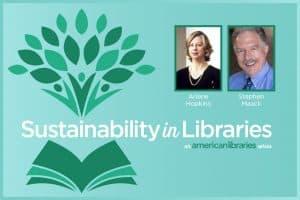 Creating a hub for resilient and sustainable community culture