It didn’t take any arm twisting to sign up publishers for a pilot program to expand UK library patrons’ access to academic research, said Sarah Faulder, CEO of the nonprofit Publishers Licensing Society. Major academic publishers like Springer, Oxford University Press, SAGE, and Wiley “voluntarily bought in” to Access to Research, a project that offers public library patrons in the United Kingdom free access to more than 8,400 academic journals.

“They felt it could run in parallel to their subscription-based services at academic libraries,” Faulder said.

Patrons can only access the articles through terminals at their local library, Faulder said. More than 80 libraries across the UK have signed up for the pilot, which launched in January and is scheduled to last two years. So far medical research articles have proved most popular, followed by history.

The other pilot is making an initial 1,000 ebooks from major publishers available for remote e-lending, including bestsellers for the first time, said Janene Cox, president of the Society of Chief Librarians.

The ebook pilot grew out of an independent report published in March 2013 by the UK government. The Sieghart report recommended that libraries should be able to offer both onsite and remote e-lending and that a pilot program be established to track how patrons actually use such e-lending. Additionally, the software platform includes an option that allows patrons to “click to buy” the ebook.

The program is operating in four districts in the UK. Cox said the initial report on patron usage found that for the first 21-day lending period for libraries in northern Derbyshire, there were 464 loans, 71 reservations, and 20 purchases.

That initial evidence suggests, according to Cox, that people who borrow books also buy them.

CLAIRE BUSHEY is a freelance journalist based in London. 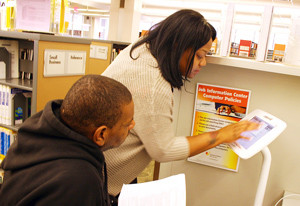 With New York City’s unemployment hovering around 8%, Queens (N.Y.) Library is amping up its technology to make a difference

A discussion on open access publishing at academic libraries