How can libraries best reach media and politicians to advocate for more funding, exposure for programs, and other vital issues? That question was the crux of “Making the News: Library Advocacy and Local Media,” a program held Monday morning at the ALA Midwinter Meeting in Philadelphia. Moderated by Shawnda Hines, assistant director of communications in ALA’s Public Policy and Advocacy Office, the program featured an association head, reporter, and government official who offered tips on how librarians can best advocate for themselves for maximum impact.

Christi Buker, executive director of the Pennsylvania Library Association, stressed that libraries should focus on what they do best when conducting advocacy, highlighting successful programs and outreach efforts that can justify continued or new government funding. Alternately, Buker said that libraries need to focus on the bad, too. If libraries are hurting due to lack of funding or other detrimental factors, they need to be upfront about it. The honesty can work in their favor.

“You’ve got to be real with people,” she said, and having a good relationship with the press is essential.

“If a reporter calls, you want them to be your friend,” she said. If a media outlet writes a story about your library, share it widely on social media, your website, and with stakeholders with influence to further “the story of libraries.”

Freelance writer TyLisa Johnson recalled how she started writing about the library world when she was a reporter for the Philadelphia Inquirer. A simple story about the irregularity of some library branches’ operating hours snowballed into a series of stories about libraries.

“I was only a patron of the Philadelphia Free Library [before writing that story], but what I learned about libraries blew my mind,” she said. Johnson worked closely with Buker on the stories. “It was that relationship building that let me write about libraries.”

Johnson noted that approaching the press with smaller issues to cover first can be beneficial. “If we start conversations at base level,” she said, “it can lead to more specific conversations down the road.”

John O’Brien, communications director and senior policy adviser for the Pennsylvania House Appropriations Committee, provided insights on getting the attention of local, state, and federal government officials. Standing out in the crowd is key, he emphasized.

“A lot of other issues—the opioid crisis, broadband concerns, the census—are competing with libraries [for funding and facetime],” he said. “Libraries have to prove their worth.” Emphasizing that libraries can help tackle those very issues is a plus, he said.

A willingness to work with politicians holding opposing viewpoints is also crucial. “It’s important to not get too wrapped up in your own echo chamber,” O’Brien said. “You have to work with whomever is going to get things done, regardless of party.”

Burker reiterated O’Brien’s point. “There is no anti-library group,” she said. You’re not working with an enemy, “you’re just working with someone who has to make tough decisions.” 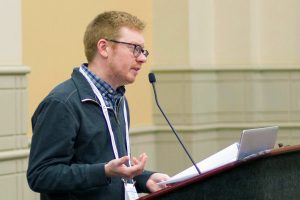 Reading groups as part of the design process