President Barack Obama announced today that he intends to nominate Dr. Carla Hayden to be the next Librarian of Congress. Hayden has served as CEO of Enoch Pratt Free Library in Baltimore since 1993 and is a former president (2003–2004) of the American Library Association (ALA).

In a statement, President Obama said:

“Michelle and I have known Dr. Carla Hayden for a long time, since her days working at the Chicago Public Library, and I am proud to nominate her to lead our nation’s oldest federal institution as our 14th Librarian of Congress. Dr. Hayden has devoted her career to modernizing libraries so that everyone can participate in today’s digital culture. She has the proven experience, dedication, and deep knowledge of our nation’s libraries to serve our country well and that’s why I look forward to working with her in the months ahead. If confirmed, Dr. Hayden would be the first woman and the first African American to hold the position—both of which are long overdue.”

“The president could not have made a better choice. Hats off to President Obama for nominating Dr. Hayden, a professional librarian uniquely positioned with the leadership and management skills and understanding of digital technology to make the Library of Congress the preeminent national library in the world, highly-valued by and serving all Americans as a treasured resource. We look forward to working closely with her to further librarians’ bedrock principle that all Americans everywhere deserve and must have equitable access to the information that they need to succeed and lead productive lives in the digital age.”

Read our 2015 interview with Hayden on her decision to keep Baltimore’s libraries open during the unrest that followed the death of Freddie Gray. 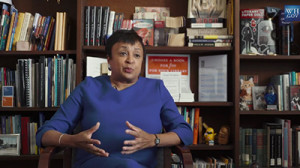 Librarian of Congress Nominee No Stranger to Historic Moments

Carla Hayden's ALA colleagues reflect on her accomplishments