The Association of College and Research Libraries’ Library Marketing and Outreach Interested Group (LMO) is fairly new. The group was established two years ago, and in the past, attendance has been minimal. However, the audience at the 2016 Midwinter Meeting was overflowing. When I arrived, there were no seats available, and even after hotel staff delivered more chairs, those seats filled too. One attendee commented, “Everyone is an outreach librarian.” That certainly seemed to be true. Many of the attendees had outreach in their job titles, and even those who did not still felt a responsibility to be doing outreach for their institutions.

As a relatively new group, much of the discussion at the session was focused on reaching existing and potential members. The group has a discussion list, acr-iglmo@lists.ala.org, as well as a Facebook page, both of which co-convener Amy Wainright encouraged all attendees to join. The group falls under the ACRL umbrella, but not all members are employed by academic institutions. In fact, nearly half of the members work for public libraries and special libraries. Member Virginia Alexander, coordinator of library marketing and outreach at University of South Carolina Upstate in Spartanburg, emphasized that we “have a lot to learn from the public library.”

During introductions, attendees expressed a common hope to learn from other group members. Coming from regions across the country and Canada and representing different types of libraries, the expertise of the individuals in the room was wide-ranging and diverse. Some had years of experience working in marketing, while others were in their first library positions. Regardless of background, many attendees stated that they felt overwhelmed by their responsibilities and hoped that future group discussions, both at Annual Conference and virtually, would offer solutions.

LMO is hosting a social on Sunday, January 10, at 6 p.m. at the Jacob Wirth German restaurant. More details are posted in the LMO Facebook page. The group will meet again at Annual Conference in Orlando, and Wainright stated that the meeting would likely be held on a Sunday morning again. She also emphasized that the group is looking for new co-conveners and that there are state-based LMO meet-ups. To learn more about LMO opportunities, join the discussion list, Facebook group, and the ACRL interest group, and participate through LMO’s ALA Connect space. 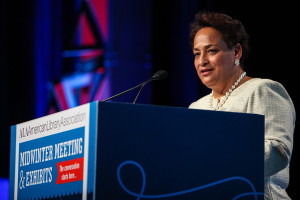 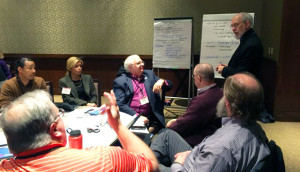