Preparing LIS Students for the Market Ahead

What are the gaps in current library school education, especially in preparing students for the job market? Discussing this topic and offering solutions at the 2016 Rare Books and Manuscripts Section (RBMS) conference on June 23 were several librarians: Melanie J. Meyers, senior librarian for special collections, reference, and instruction at the Center for Jewish History; Charlotte Priddle, librarian for printed books at the Fales Library and Special Collections; and Kyle Triplett, rare books librarian at New York Public Library.

Meyers began her talk, “Evangelizing for Reference: Teaching the Value of Public Services,” by explaining that for years she thought of herself as a special collections librarian who happened to have a reference component to her job. But she has come to realize that she is actually a reference librarian who happens to work in a special collection. She pointed out that there is an idea that special collections staff devalue reference, a lingering feeling that because the stacks are closed, staff members forget libraries should be democratic spaces. Thus, public services are often undervalued. Meyers argued that part of what contributes to this devaluation is that there are not a lot of reference classes tailored to the special collections environment. Instead, reference classes in library school are general and are geared toward public or academic libraries. In order to combat this, Meyers said, “We as professionals really need to address it and provide it.” So, she did. Meyers designed a reference course specifically for special collections, which is offered onsite at the Center for Jewish History. With few examples to work from, she was able to create the class herself from scratch and to “evangelize for reference.” Meyers took on a collaborative approach, relying on peers, colleagues, institutional cooperation, and student involvement to create the course. “I truly feel that I learned as much from them as I hope that they learned from me,” she said.

Triplett spoke about teaching his students about instruction with special collections materials. In his paper titled, “Defining Wonder: Teaching Rare Books with Collections and Collaborations,” he began by stating, “I do think of us as defenders of wonder. Like many of you, one of my favorite things to do is to talk about books.” This passion shines through in his teaching, and collaboration plays a key role in designing the best course possible for his students. Triplett jested, “Most of my methodologies come from a conversational colloquia with my mom called ‘So what do you do exactly?’”

However, as he went on, it became clear that Triplett does strive to break down barriers to access and understanding for his students. “I strive to obliterate preciousness; I tell my students, it’s a book, you go like this…” and he signed the motion of opening a book. In doing so, Triplett explained, he hopes to build confidence in handling rare materials. He finds that increasingly students come to his course with no library experience and thus, often have dreams akin to “being buried in books—their last breath being of inhaled morocco.”

As he designs his course each semester, Triplett said he continues to tinker, but three principles remain consistent: connection, community, and career. Connection: “The stuff is the thing.” The books give it all meaning, and he works to ensure that he has either a person or a material in each class. When thinking about community, Triplett emphasizes that there is a large community of rare book professionals to connect with at conferences like RBMS but also through networking in general. He also encourages group work in the classroom. Finally, career. Triplett said that he inevitably hears “I want your job!” at least once a semester, but he knows that not all his students will go into rare books, so he tries to remind them of the reality of the job market. “I encourage them to get any experience at all. The dream job might be three jobs away,” he said.

To conclude the session, Priddle gave a sobering comparison of student expectations to the real world, in her paper “But I Want My Job: Library School vs. the Real World.” For Priddle, who works in New York, scores of library students graduate in the area each year and compete for the same jobs in a very selective market. In order to help her students and mentees become better prepared, Priddle evaluated LIS education and attempted to fill in the gaps. Some of the gaps she noted include:

“Experience waiting tables or in retail is much more important than being able to quote Bowers at the drop of a hat,” Priddle said. Students need to be exposed to and understand the full arc of a library career. She went on, “Special collections work is not just about walking thorough the stacks smelling the old books.” Part of her work to prepare students happens through the LIU Palmer School Dual-Degree Mentoring Program, where students are paired with mentors and are given career advice, internship and employment opportunities, and networking opportunities. However, even with programs like these, each student has to make his or her own way and create a narrative. 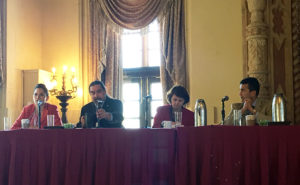 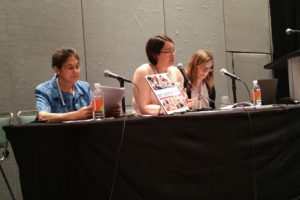