Summit on the Future of Libraries

First session at the Library of Congress

At times it felt like speed dating for librarians. “Librarians From Now On: Imagining the Future” a national summit on the future of libraries that was held at the Library of Congress (LC) in Washington, D.C. today, went fast and furious through a day of impressive speakers and discussions with invited library thought leaders. So many conversations that invited further engagement. More than 80 participants, who included librarians of all types, foundation leaders, publishers, and library vendors, spent time sharing ideas after each speaker’s presentation to begin a national conversation about the libraries of the future.

The event was held in the Members Room of the LC, an historic setting for thinking about the future in the context of the past. James H. Billington, the 13th Librarian of Congress, talked about the initiatives at LC, including plans to find new synergies and efficiencies while bringing digital services together with their own future plans.  The LC’s  National Book Fair will be at the Washington Convention Center to allow them to stream some sessions online.

Other speakers for the first day of the two-day event included Stephen Dubner, author of Freakonomics and Think Like a Freak; Joel Garreau, Lincoln Professor of Law, Culture and Values at Arizona State University; Renu Khator, chancellor and president of the University of Houston; and Thomas Frey, futurist and executive director of the DaVinci Institute.

Garreau showed a photo of Whole Foods café as he talked about places that will survive the next few years. “The future of these buildings is face-to-face contact. It’s about community. A lot of urban places are going to die (in the future). The ones that are really good at face-to-face contact will thrive,” he said. Librarians are essential to the future because the library is not about buildings or books. “One of your biggest assets is trust,” he said.

Higher education of the future will be very different in 10 years than it is today, said Khator, the chancellor and president of the University of Houston.  It will “provide something of value that you can’t get anywhere else. Universities and libraries will have to figure out this future together,” she said. “Libraries are in the business of knowledge. It’s about the experience, not about the books. In the future they may look different but they will definitely be there.”

Participants began the day with writing down two words on badge ribbons that expressed what they thought about the future of libraries. They were able to change those words throughout the day. Words were mostly aspirational, including alliances, sharing, learning, community, flexible, innovative, daunting, formatless, innovative, hyperlocal, trust, convergence, and now. Karen Keninger, director for National Library Service for the Blind and Physically Handicapped, and a Newsmaker in American Libraries said, “My dream is that all libraries in the future will be universally accessible.”

Dr. Billington echoed the optimism in the room. He referred to a memorial in which the speaker talked about 3 words: Do, with, and for. “Do something, with someone, for someone. That’s what all the people in this room are (and represent).” 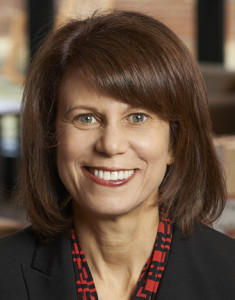 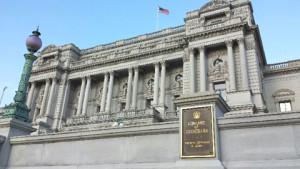 Summit on the Future of Libraries: Day Two