Forty-five years ago this weekend, the deadliest mass murder of gay people prior to the Pulse nightclub shooting in Orlando took place in an out-of-the-way, dingy corner of the French Quarter in New Orleans. The arson fire that torched the Up Stairs Lounge, a gay bar on the second story of the building at the corner of Iberville and Chartres streets, on June 24, 1973, became a turning point in LGBTQ history—if only in retrospect, after years of neglect. Even now, few people are aware of this tragic event in which 32 people were incinerated in less than 20 minutes. Author Robert W. Fieseler hopes to correct this with his narrative history, Tinderbox: The Untold Story of the Up Stairs Lounge Fire and the Rise of Gay Liberation (W. W. Norton, 2018).

Fieseler, an Auditorium Speaker at the 2018 ALA Annual Conference in New Orleans on June 23, told attendees his work is a “meditation on the consequences of closeted life in America.” The Up Stairs Lounge was an oasis, Fieseler said, where the mostly secret gay community could get together in a place “safe from the outside world that was dominated by heterosexual prejudice.” It was an era when, according to a 1973 National Opinion Research Center survey, 70% of all Americans considered homosexual activity to be “always wrong.” Unlike other urban centers like San Francisco and New York, “The Big Easy had not yet embraced public openness,” he said. Only about 700 out of some 60,000 LGBTQ individuals (10% of the population) in the city were publicly gay. 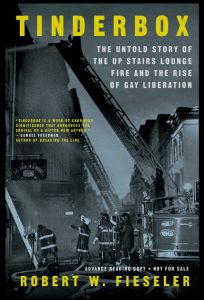 “It was a vastly different America in 1973,” said Fieseler. “I did not want to start writing a book of history and wind up writing a book of activism by transplanting the values of 2018 into a past where they did not reside.” It’s useful to see the past, he said, “by lifting the mental guardrails of today, where homosexuality is more readily accepted, and by rebuilding the closet as it existed institutionally.”

The fire, which lasted less than 20 minutes in a place where fire code violations were not enforced and had only one combined entrance and exit, was started by a “severely conflicted individual who had been violently ejected from the bar earlier in the evening” for creating a disturbance. According to at least two witnesses, he left stating “I’m gonna burn you all out” some 30 minutes before the fire started. Fieseler said that the suspect, Rodger Dale Nunez, was “never questioned by the police” and remained at large. The investigation was eventually closed after Nunez committed suicide in 1974.

Because the victims were gay, they were considered social subversives. One victim, Bill Larson (an alias used by William Roscoe Lairson), was a pastor of the Metropolitan Community Church of New Orleans, a rare LGBTQ-friendly community group. His remains were left in a window for four hours as a “spectacle” to be photographed by the local paper, the Times-Picayune. Fieseler said his estranged mother, Anna Howell, did not want his remains shipped back to Ohio for burial. The Catholic Church “denied several other victims proper burial rights” because of their status and “declined to hold a memorial” for them. 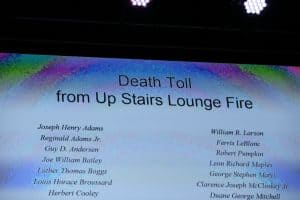 Another victim, Ferris LeBlanc, was a veteran who had fought on the beaches of Normandy during World War II. After he was identified by an anonymous tipster, Fieseler said, police did not notify his sister Marilyn, who lived in California. She did not find out he had been in the fire until 42 years later. Members of LeBlanc’s family were in the audience during Fieseler’s talk.

In those days, the consequences of being connected to a gay venue could get you fired, injured, or dishonorably discharged from the service, Fieseler said, so people tended to remain silent, “with their hands on a powerful social eraser, the closet, which could make a burning building vanish along with its screaming voices.”

But those voices are no longer silent. Fieseler said that on June 25 an interfaith memorial would be held at New Orleans’ St. Mark’s United Methodist Church to commemorate the 45th anniversary of the fire, with a second line (brass band parade) to the site of the former Up Stairs Lounge. 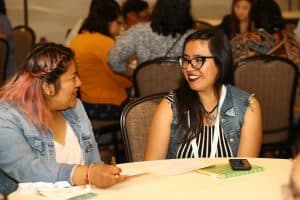