The Future of Learning

How technology programs and advances can impact education innovation

How is education changing to better support students and empower educators in the digital age? Atlanta-based panelists Jeffrey Martín and Stephen Harmon shared practical programming already being undertaken and visionary ideas for K–12 learning in “Libraries Transform: Education Innovation,” Monday’s plenary session of the Symposium on the Future of Libraries at the American Library Association’s 2017 Midwinter Meeting & Exhibits in Atlanta.

Martín, founder and CEO of honorCode, a program that aims to integrate coding into the K–12 curriculum, spoke about his experiences in developing a coding initiative at Atlanta’s Drew Charter School.

“We envision Atlanta as the Silicon Valley for the South,” says Martín, noting that Georgia ranks third, behind New York and California, in the financial tech sector. However, Atlanta also “has the highest income inequality in the US,” he says, and only 5% of Atlanta Public Schools teach computer science. Martín’s idea was to create a talent pipeline that would prepare diverse students for the city’s burgeoning tech scene.

“It’s going to take more than instructional skills to get these kids into these jobs,” he says. The curriculum, which is aligned to Georgia Common Core standards and teaches kids programming languages such as Scratch, HTML, CSS, and JavaScript, will also prepare coders with social-emotional skills. “We have to develop the whole person,” Martín says.

Another thing that’s different about this program, which has received funding from Google and recognition from Forbes, is that it does not seek to add coding teachers to schools, but to train and empower teachers to incorporate coding into their individual classrooms.

Martín thinks that media specialists and librarians have a role to play in incubating these programs and making them successful, or with any type of STEAM program. He sees them taking on responsibilities as teachers and instruction partners that stay up on computer science and technology trends, information specialists that provide leadership and expertise in acquiring and evaluating information, and as program administrators who guide activities and work collaboratively with the community to define the program and build partnerships.

Switching gears, Stephen Harmon, director of educational innovation at Georgia Tech’s Center for 21st Century Universities, painted a broad picture of what the future of education could look like.

“There’s an exponential growth in our digital infrastructure,” Harmon says. He presented Moore’s Law as an example, the idea that computer processing power doubles every two months. “By 2040, our desktop computers will have the processing power of all human brains.”

Harmon shared astounding achievements from different scientific disciplines. Advances made in the field of neuroscience are ripe with inspiration—brain-to-brain communication is already possible, and engineer and entrepreneur Peter Diamandis thinks we’ll soon have the ability to connect our brains to APIs (application program interfaces). Augmented artificial intelligence (AI) is another area that shows exponential potential. Harmon recounted the uncanny story of how the team that invented IBM’s Watson computer also invented Jill Watson, an AI college teaching assistant that students didn’t know wasn’t human. “She” was even nominated for a teaching assistant award at the end of the semester by a handful of students, he says.

Major paradigm shifts have occurred almost blanketly across the economy, Harmon says, except for one sector. “We haven’t seen the kind of change in education like we have elsewhere,” he observes. For instance, while communications delivery has progressed from horse-delivered to car-delivered to electronic messages, teaching is still structured around meeting face-to-face in a classroom. MOOCs, he says, are an example of educators using new tools for the same things they’ve always done—“we took technology and we lectured with it.”

Educators and information specialists will have to examine and decide how to use technology in new ways. Two factors that may greatly impact the paradigm shift in education, Harmon says, are predictive analytics and learning at scale, which can involve the use of technologies to make higher education more affordable. Importantly, the future of learning must target cognitive skills, he says. “We need to focus on adaptive expertise.”

The program’s Q&A portion tapped Martin and Harmon for reading recommendations, thoughts on privacy, and “What does a day in the library look like in 2027?” a question the Indiana Library Federation is attempting to answer right now.

Harmon predicted the future library will help greatly with research skills and the curation of tools, while Martin pointed to the library’s design-thinking direction, and it being a place to define opportunities and begin prototyping.

“I think we’re going to get more used to change,” Harmon says. 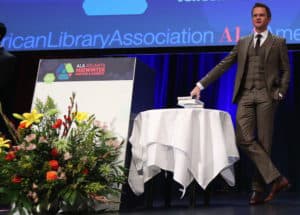