At a special Sunday morning session of the American Library Association (ALA) 2018 Annual Conference in New Orleans June 24, Librarian of Congress Carla Hayden and Archivist of the United States David S. Ferriero sat down for a conversation about the similarities and differences between their institutions. 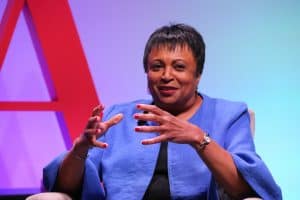 The two immediately began playing a friendly game of one-upmanship. Hayden kidded Ferriero about the Library of Congress (LC) being older (established in 1800) than the National Archives (1934). Then Ferriero mock-complained that in 1935, then–Librarian of Congress Herbert Putnam refused to relinquish LC’s copies of the Declaration of Independence and the Constitution to the Archives, so that in 1952 President Harry S. Truman had to “make a grab for the documents.” Hayden said that it took tanks with howitzers to pry them away from the library. (See the archival film footage.)

The difference in collections between the Archives and LC, Ferriero said, is that “we have a dividing line between whatever the government creates, which is me, and everything they don’t create, which is you.” Hayden added, “Of course, the Library of Congress has the first printing of the Declaration of Independence [the Dunlap Broadside], with John Hancock printed at the bottom.” Ferriero pointed out, “There would never have been that first printing if the original signers didn’t sign something—which I have.”

Ferriero said that presidents sent their records to the National Archives on a voluntary basis, even after the Federal Records Act of 1950 created a framework for their management. “But because of President Nixon’s insistence that he owned some of his papers, the Presidential Records Act was passed in 1972,” mandating the preservation of all presidential and vice-presidential records. During the question-and-answer session later, an audience member asked about the recent news story in Politico claiming that President Trump rips up memos, letters, and emails that staffers have to repair. Ferriero replied that he “learned about it when you did.” He said that most administrations must be trained in records management; when something like this is reported, the Archives “launches an investigation into what is going on, obtains a resolution, then posts its recommendations.”

Hayden was intrigued with the Archives’ twice-a-year sleepover, during which schoolchildren get to sleep in the museum near the Declaration of Independence and Constitution. “It’s spooky,” she said. “Next morning, they tell me, the Archivist of the United States makes pancakes for the kids. We have Thomas Jefferson’s recipe for macaroni and cheese. Maybe we can do something similar.” Ferriero said in an aside to the audience, “She’s been dying to horn in on this event since she came to Washington in 2016.” 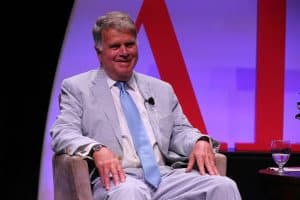 “The one thing that keeps me up at night,” Ferriero said, “is maintaining access to government records in perpetuity.” When Ferriero was university librarian at Duke in 2001, author Nicholson Baker came out with a book, Double Fold: Libraries and the Assault on Paper, which criticized some research libraries for throwing out the paper originals of rare newspapers after they had microfilmed them in the 1980s and 1990s. “The microfilm copies were poor and there was no quality control,” Ferriero said. “Many copies of the New York World, the first newspaper to introduce color supplements, were destroyed. Yet the microfilm is in black-and-white. We don’t want to get into a position where we lose anything.”

Hayden pointed out that it is not just technology that poses preservation problems: “Martha Washington burned almost all the letters she and George Washington had exchanged after he died—none are left.” Ferriero said that the Archives houses 377 treaties signed by Indian nations that “could have been destroyed” at one time or another but are now used “by tribal lawyers to settle water rights claims. But they also tell a horrible story of how the US government treated Native Americans.” 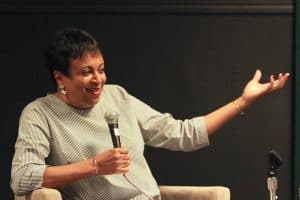 Dr. Carla Hayden: In Her Words