It’s day one of #alaac18! As always, it was full of excitement and boundless energy, especially for the Opening General Session.

You’re ready for Annual to start. 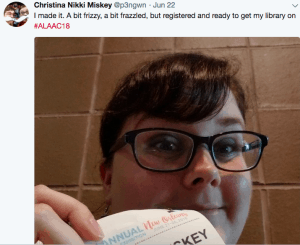 You are psyched for all the sessions.

You want to pay it forward.

If any students are here at #ALAAC18 let me buy you food. I’ve been in your position. Let me treat you.

You waited in line for hours to see former First Lady Michelle Obama and Librarian of Congress Dr. Carla Hayden.

But you have no complaints.

And for the @alaleftbehind folks, here’s a tasty tip.

Eating doughnuts at my desk because I'm seeing all these great pics of people eating beignets @alaannual and I'm jealous. #ALALeftBehind

BONUS tweets: People who had more fun than you getting to New Orleans!

You never know when someone might be eyeing you.

Sitting at my @SouthwestAir gate @BWI_Airport waiting for my plane to board to NOLA and trying to pick out the librarians…#alaac18 here I come! BTW borrowed this idea from @librarycourtney and bought some postcard stamps. I can send mail to friends #ALALeftBehind DM me addresss pic.twitter.com/A9eVvSc4fN

You never know when you might need to apologize. 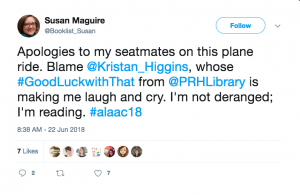