As a nation and as architects, we are constantly developing ways to reduce energy consumption in the new buildings we design and construct. In fact, we are looking for ways to create new buildings that will be energy neutral—that is, they will produce as much energy as they consume. However, if we focus only on new buildings, we will not reduce our consumption; we will only increase it at a slower rate. Thus, the critical problem is to address the sustainable improvements we can make to existing buildings. (Sustainable buildings are designed to take maximum advantage of the natural setting and climate while causing the least possible damage to the environment. As a result, they are efficient in their consumption of energy.) We can reduce energy consumption in the building sector only by dramatically reducing the amount of energy consumed by all the buildings that currently exist.

One of the ironies of “green” or sustainable architecture is that each new green project is advertised as using dramatically less energy than a comparable building of the same size that meets all code requirements. No one ever asks about the intensity of the occupancy of the new building, the number of square feet per person in that new building, or whether the building was even necessary or appropriate. Often, institutions will construct new, energy-efficient buildings, but will continue to heat and cool the older buildings, which may be inefficient and perhaps superfluous. Conversely, choosing to transform an existing building into an energy-efficient, sustainable building would result in true savings in energy consumption.

Why are existing libraries good candidates for transformation to sustainable buildings? Libraries are important community centers visited every day by the public. Library buildings are usually well constructed and intended to have long lives. To preserve their contents, these buildings generally have a stable interior climate, which is compatible with most energy-saving strategies.

If a community is contemplating how to transform an existing library building into a more sustainable facility, a number of standard techniques can be considered. Some of these improvements are easy to bring about: 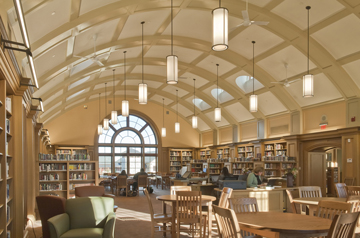 The main reading room of the library in the Goodhue building, a 2010 reconstruction of a 1903 structure on the Hackley School campus in Tarrytown, New York. The 16,000-square-foot building, expected to be certified LEED Gold, is heated and cooled by a closed-loop geothermal system, among other sustainable improvements that significantly increase energy efficiency. Photo by Robert Mintzes.

More ambitious improvements or alterations can further reduce the energy consumption of an existing library building:

Library buildings do not exist in isolation. Even in cities, libraries often are located on somewhat open sites, which present opportunities to create more sustainable landscapes that can also generate energy.

Having reviewed strategies for improving library buildings and their sites, we might ask: What are the prospects for the future, and how can libraries plan for sustainability? Here are three increasingly ambitious sets of objectives: 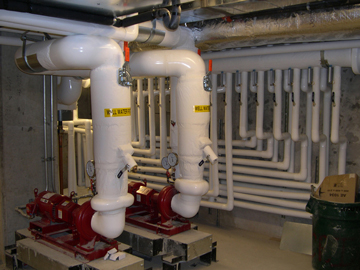 The geothermal heating and cooling system consists of 21 closed-loop wells that are drilled into solid rock to a depth of 470 feet. Each well contains piping that circulates water at a constant ground temperature between 50 and 60 degrees. The water absorbs heat from the ground in the winter and rejects heat into the ground in the summer. The piping from all 21 wells terminates in the mechanical room of the building, where high-efficiency equipment circulates warm or cool water to fan coil units that produce hot-air heat or air-conditioning throughout the building. Photo by Ken Pojman.

Libraries are solid buildings, constructed for the long term. They are constantly visited by the public and can set an important community example. Library facilities should be community leaders in sustainable practice. This revolutionary transformation can occur incrementally, with quantifiable results that provide an excellent return on the investment.

PETER GISOLFI is senior partner of Peter Gisolfi Associates, a firm of architects and landscape architects in Hastings-on-Hudson, New York, and New Haven, Connecticut. He is chairman of the Spitzer School of Architecture at the City College of New York and is the author of Finding the Place of Architecture in the Landscape. He can be reached at pgisolfi@petergisolfiassociates.com/.

Candidate for ALA President

The Little Library that Could