After shutting its doors in 2008 following years of declining enrollment, Antioch College is on the verge of reopening, and the Olive Kettering Library on the Yellow Springs, Ohio, campus stands to play an integral role in the school’s recovery. In 2009, an alumni-led group purchased the campus and other college assets and began efforts to resurrect the school.

With just 35 students and six faculty members, classes at the revived Antioch will begin October 4. The initial freshman class will receive full scholarships for all four years funded by interest from the school’s endowment. They will complete individually designed majors based on one of 11 concentrations, and Antioch’s pioneering cooperative-job program will continue, requiring students to perform six full-time semester-long work experiences over the course of their studies.

When the liberal arts college, founded in 1852 and known for its commitment to social change and political activism, closed three years ago, the library stayed open limited hours, serving local residents and alumni with a skeleton staff that consisted of Head of Technical Operations Ritch Kerns, who is serving as interim librarian, and Library Technical Assistant Sandy Coulter, who staffed the circulation desk.

Kerns told American Libraries that the Olive Kettering Library is 57 years old, and the facility has deteriorated significantly. In preparation for the campus’s reopening, brickwork was repaired on the building’s exterior, and the roof was redone. Since Antioch is embracing a green culture, the college hopes to eventually replace the antiquated windows with energy-efficient ones.

Inside, the first priority is replacing the badly worn carpet. Ultimately, though, the primary goal is to reconfigure the interior space to reflect the library’s expanded role as the center of student life. Initially, only three of the campus’s 30-plus buildings—an administration/classroom building, a dormitory, and the library—will be opened. “Since we don’t have a student union,” Kerns explained, “this is where students will come and meet.”

Kerns said the revamped library “will create more common areas for students with laptops,” including coffee bars. That points to another pressing need: to upgrade the library’s technological capabilities to accommodate incoming students armed with computers, iPads, and Kindles.

A comprehensive review of the 300,000-volume print collection is underway, said Kerns, who noted that “the collection has never been weeded.” While acknowledging the need to extend electronic resources—a subscription to the JSTOR archive of digital journals is planned, to complement the library’s membership in the OhioLINK academic consortium—Kerns stressed, “We still respect our books.” He cited studies showing that, while students prefer e-journals to their print equivalents, they would rather use print books than electronic ones. The goal, he said, is “having that mixture of the best of both worlds.” Although the library has not been purchasing books during the interim, journal subscriptions have been maintained.

Kerns said funding for the library—as for all other departments of the revived Antioch—is extremely tight. The library has no dedicated budget line, but receives funds from the school’s three-year, $27-million operating budget. In June the college’s 14-member board of trustees pledged to give $9 million over the next three years to help cover operating costs.

The library is in the process of hiring a director, and Kerns said they hope to have one in place within a month. In the meantime, when the inaugural class arrives, they’ll be served by Kerns and Coulter, augmented by two paraprofessionals.

Kerns sees the revitalized Olive Kettering Library as a symbol of Antioch’s resurrection. “We’re the phoenix,” he asserted. “Literally—the building could have been ashes.” But instead, “now it’s starting to look like a modern, accessible place.” He voiced his hope that the fall and rise of Antioch and its library “serves as a model for other libraries that are struggling.” 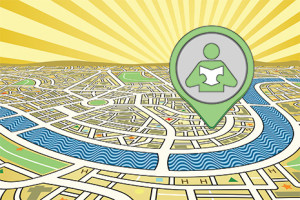 Study challenges traditional assumptions about libraries’ roles in the community

The Problem with Sports Novels