Kansas State Librarian Joanne Budler recently terminated the Kansas Digital Library Consortium’s contract with ebook vendor OverDrive to become a beta tester of 3M’s new Cloud Library ebook lending service. The change is the culmination of a nearly yearlong battle over whether the consortium owned the content it had purchased or had simply licensed it. It also required her to undertake a massive campaign: contacting 165 publishers whose ebooks the library had purchased, because OverDrive requires those publishers’ permission to transfer platforms. In this interview, conducted by email with American Libraries Senior Editor Beverly Goldberg, Budler discussed her decision and its ramifications for Kansas.

AMERICAN LIBRARIES: Why did you decide to take this bold stance and make Kansas a precedent?

JOANNE BUDLER: There were really only two issues: pricing and ownership of content.

A pricing increase of 700% is unreasonable, especially in today’s economic climate when library budgets have consistently been cut over the past 3 years. In addition, if the State Library (on behalf of the Consortium) agreed to pay $75,000 for the platform fee, there would be that much less funding for content.

But the bigger issue was the change in paragraph 11.4 which basically changed our ownership of content to a subscription. This tied our access to this content to a continuation of the service with OverDrive. I believed, and Deputy Attorney General Jeffrey Chanay agreed, that content we purchased under the 2005 contract is ours. We should be free to move it to another platform or “shelf,” as long as we maintain the integrity of the Digital Rights Management (DRM) system.

Was this feasible only because of the original contract with OverDrive, which the company has now changed?

Yes, that is correct. Once paragraph 11.4 was changed to the new contract language and that new contract was signed, I believe it would have been more difficult, if not impossible, to claim ownership of that content.

Have all of the publishers that you wrote for permission responded to your request?

No. We sent letters to 165. Approximately 20 publishers have not responded at all.

How are you handling the publishers that required an additional fee to have their titles included in the consortium’s collection?

The state library (on behalf of the consortium) owns this content and will not pay additional fees. The Attorney General’s office will be handling future correspondence regarding this.

What percentage of the OverDrive collection will be available to Kansas libraries on the new 3M platform? At least half?

We actually have two platforms: one for ebooks (3M Cloud Library) and one for audiobooks (Recorded Books: OneClickDigital). At the present time we have written permission to move 73% of the total ebooks and 63% of the downloadable audiobooks to the new platforms.

Are there any gaps in service, as the Topeka and Wichita librarians were worried about?

The administrative service through 3M has been set up for the staff of the State Library of Kansas and librarians around the state (PDF file). The service itself will be accessible to library users this week, and the PC app will be ready no later than March 31, 2012.

Are there any independent agreements between libraries and vendors/publishers in the works, and how does that affect the consortium’s ability to negotiate on behalf of its members?

Have you ever regretted going down this path?

No. It was the right thing to do.

How do you think this will affect publisher/vendor agreements with ebook consortia in other states?

I don’t know that it will. I guess we will have to wait and see.

What advice do you give other consortia in negotiating with ebook vendors and publishers?

I think that the library community and the publishers need to negotiate to a gain-gain solution. Certainly the library community wants publishers to continue to be economically successful. After all, where would we be without publishers? And anecdotally we know that the same library user who borrows from his/her library also purchases books–in all formats. I wish that there were more empirical evidence to support this!

Should ALA set guidelines for ebook lending contracts, and if so, what elements should be included?

Yes, I think that would be very helpful. E-content should not be treated any differently than physical content. It is irresponsible to spend tax dollars on material that evaporates or disappears at the end of a certain period of time, whether that is a subscription period or a contract life.

Ownership should be retained by the purchaser. Transfer from one shelf/platform to another should be based on DRM, i.e. as long as DRM is maintained, it should not matter which shelf/platform holds that content. 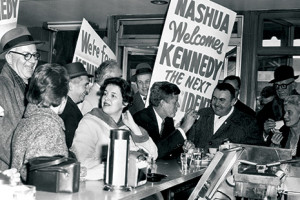 This Political Library Gets Everyone’s Vote