Library Heroes Shelter Evacuees from the Summer of 2012

This summer saw wild weather events spring up across the country, with record high temperatures, historic droughts, thunderstorms that downed power lines, massive wildfires, and flash floods. The resulting mayhem provided opportunities for libraries to better serve their communities while it spelled disaster for at least one facility.

Perhaps the hardest hit was the Jim Dan Hill Library on the campus of the University of Wisconsin–­Superior, which suffered severe flash flooding on June 19 and 20 after a rainfall of nearly 10 inches. More than eight feet of water ended up surging into the library’s lower level, soaking most of its 200,000-book collection. The library’s upper floors, which include computer labs, many reference books, and the university’s archives and special collections room, were not affected.

About 45,000 books and periodicals were damaged beyond repair, but students, staff, and the disaster-recovery company BMS Cat worked quickly in the storm’s aftermath to attempt to save more than 100,000 books. The process of salvaging the volumes involved freezing the ­water-logged books to keep them from warping or expanding. The books were then shipped to Fort Worth, Texas, where they were freeze-dried at a vacuum-chamber facility. The idea is that by bringing the frozen water directly to vapor, with no stop at its liquid stage, the books may be saved.

University spokesperson Lynne Williams told American Libraries that librarians are currently going through the inventory of unrecoverable items and talking with faculty and the insurance company to determine how to replace materials in the collection. She said some may be repurchased, others updated with new editions, and some reacquired as ebooks.

On August 3, the library and university received some good news when the Federal Emergency Management Agency announced it had agreed to provide up to 75% of the funding needed to rebuild any infrastructure damaged by the flooding.

While restoration was underway, library services were moved to a temporary location on campus. On August 7, the building officially reopened, though the lower level remained closed for more repairs; that area was expected to reopen in late September.

Librarians at the Poudre River Public Library District in Fort Collins, Colorado, also found it necessary to set up a temporary library as a result of wildfires that burned some 136 square miles of the state throughout June and July, causing at least $450 million in damage. The impromptu library, established at a Loveland evacuation center housing residents forced to flee, included 300 donated and library-owned books as well as eight laptops that adults could use to check fire maps, file insurance claims, and communicate with family members. Meanwhile, the district’s 10 librarians worked in shifts to provide games and puzzles; they also set up a projector and screen to show movies to children.

“We wanted to do something,” Irene Romsa, the district’s outreach services manager who spearheaded the effort, said in the June 13 Denver Post. “We were really antsy because it was our community being affected.”

In Oklahoma, a state known for its tornadoes, residents experienced a different type of disaster as wildfires took hold of several counties in early August. Jackie Hill, a spokesperson for the Tulsa City-County Library, said that while none of its libraries were directly affected, two of its branches—Pratt and Charles Page, both in Sand Springs, just west of Tulsa—were assisting locals by providing snacks, water, Wi-Fi, and laptops. Children’s ­librarians were also on site to conduct storytimes while parents completed insurance forms and other paperwork.

On the East Coast, temperatures didn’t quite reach Fahrenheit 451, but after a derecho—a massive wind and thunderstorm that forms with little warning—descended June 29, millions were left without power, some for as long as a week. In the storm’s wake came a brutal heat wave, with temperatures breaking the 100s; the extreme weather is blamed for at least 23 deaths. Several branches of the District of Columbia Public ­Library (DCPL) were among the ­libraries playing a crucial role in the sweltering days following the derecho, acting as cooling centers that stayed open late.

On September 5, DCPL—along with the National Network of ­Libraries of Medicine and a host of other groups—is holding a free conference at the Library of Congress about libraries’ role in mitigating  the suffering associated with a power outage. The morning session examines the roles that libraries can play during disasters, while the after­noon session includes workshops on improving your library’s disaster preparedness and providing disaster-related information to your community.

BRIAN COOK is a freelance writer based in Chicago.

How Public Libraries Are a Boon to Small Business

Information resources are especially valuable to entrepreneurs in tough times 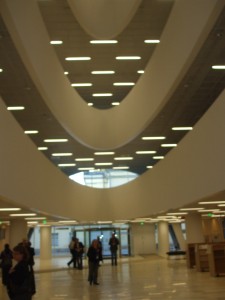