Picture this: A glimpse of your state’s libraries at work

How would you like to tell the world that in one day more than 160,000 people visited your state’s libraries and more than 1,000 people received job-search help? Thanks to Library Snapshot Day, you can.

Launched three years ago in New Jersey, the effort has expanded to include librarians nationwide in collecting statistics, customer comments, and pictures from libraries all over their state during a single day, then compiling the results and posting them online. So far the event has taken place in at least 31 states—and it’s catching on. The American Library Association’s Office for Library Advocacy offers an online tutorial with instructions and templates for those planning a similar day.

Peggy Cadigan, one of the founding Snapshot Day coordinators, told American Libraries that she “never expected Snapshot Day to go viral.” Cadigan said she conceived of the idea as a strategy to combat general budget cuts and out of a desire to raise awareness of library contributions.

Snapshot Day began when the Garden State held two such days in 2009, on February 19 and October 7. During those two days, New Jersey libraries lent more than 126,500 items and answered just over 15,000 questions, on average.

Founding project cochair Heidi Cramer, of Newark (N.J.) Public Library, and past president of the New Jersey Library Association emphasized that the Snapshot Day team “was sure libraries would appreciate the ease of participation.” The effort resulted in positive participant feedback, sharing of ideas, and practical applications, she said. 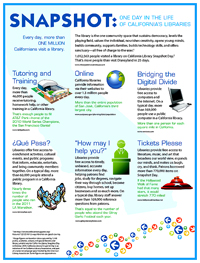 Patricia Tumulty, executive director of the New Jersey Library Association and chair of ALA’s Committee on Library Advocacy, encourages every state to participate in this project annually. She characterizes it as “a wonderful and simple activity for all libraries to demonstrate how our libraries serve our communities every day.” She added, “The results provide an extremely powerful advocacy tool to be shared with decision makers.”

It is one thing to speak in the abstract about the benefits of libraries, but pictures—such as ones of children engaged in a story for the first time or of adult students preparing for a new career—speak volumes more.

(The Office for Library Advocacy plans to showcase other states that have done Snapshot Days. Visit Ilovelibraries.org in November for more information.) 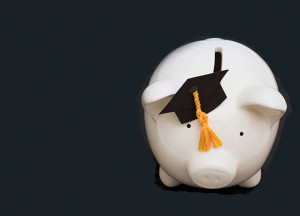 Demonstrating the real net worth of a library degree

Using technology to reach your clientele